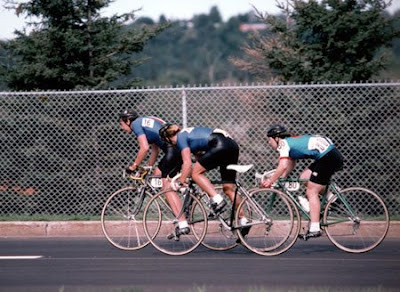 My Cibachrome image from the women's road race, 1983 Universiade Games, Edmonton.
The two American's are riding Ciocc bikes. The lone Canadian is riding, of course, a Marinoni!
© 2007 Richard Lee - All Rights Reserved.
Twenty-five years ago, during the 1983 Universiade Games in Edmonton, Alberta I photographed the women's & men's cycling road race. I captured the women's race with the help of my long gone Canon F-l camera along with the Canon 300 mm f.4 telephoto lens on slide film. Many years later, I finally had the slide processed as a Cibachrome. Although now called, 'Ilfordchrome,'  I still refer it to 'Ciba' or 'Cibachrome.' Originally named after Ciba-Geigy of Switzerland. It's the photographic process used in the reproduction of slides on photographic paper. The chief advantage is that the dyes used will not fade, discolor, or deteriorate for a long, long time. I keep all my cherish prints in an archival designed box for protection.
The World University Games, were first held in Warsaw, Poland in 1924. Attracting top world class athletes, held every two years, have become second in prestige to the Olympics. The next games will be held in the Summer of 2009,  Belgrade, Serbia.
Word has it that Edmonton is bidding for the 2015 Games, I hope they get it, again. And, a young twenty-five year old Frenchwoman by the name of Jeannie Longo finished in third place... grabbing the bronze!

Groover said…
Very interesting photograph. Wondering what the fabric of the American cycling clothes was. It looks shiny?
November 16, 2008 at 12:10 AM

Flandrian said…
Great memories, I was a rider on team GB in the road race and team time trial. Remember Alex Steida's surprise win in pursuit.
December 30, 2009 at 12:07 PM

Welcome aboard! Excellent, from my memory the road race was exciting. I have photos of that race too, and I'll be posting them very soon!
December 30, 2009 at 1:50 PM