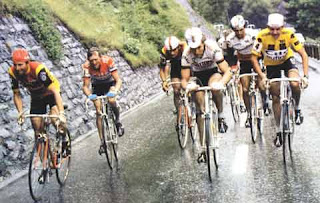 The Swiss mountain goat, Tour de Suisse 1981.
Breu in yellow(far right) at his favorite Tour. On board to overall victory.(right to left): Breu, Natale, Thurau, Lubberding, Fuchs, & Zotemelk.
From: 'The Fabulous World of Cycling.'
Beat Breu was a climbing marvel in the eighties. He especially loved the Tour de Suisse.  "My favorite race was the Tour of Switzerland and not the Tour de France. The Tour is so long, and there's nothing to eat but spaghetti for breakfast and dinner, and banana sandwiches in the race," he said.
At the 1981 Tour de Suisse, he collected two stage victories and commanded a very solid overall victory. And Breu liked his home Tour so much he won again,  this time in 1989. There's always an exception to the rule. One would also say that he enjoyed the Tour de France because of his two mountain top victories back in 1982;  Stage 13 to Plat d'Adet and the famous one that put him on the cycling map... Stage 16 at L'Alpe d'Huez! 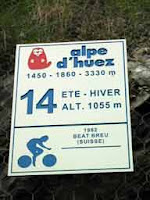 Breu's most famous sign!
As an accomplished climbing specialist he knew just what to do. He used a special light steel bike constructed by a Swiss frame builder. Light wheels were added, along with plastic brake levers and no handlebar tape to save on every ounce of weight. He was the first to experiment with bar-end shifters, to save on the effort of reaching on the downtube. Breu was the perfect grimpeur, where less = more.  When he was at the top of his powers he weighed a svelte 127 Ibs standing  5 foot 6 inches tall.
The little Swiss excelled at cyclocross winning the Swiss Championships (1988, 1994) and medalling at the 1988 World Cyclocross Championships for bronze.
I couldn't help but smile when I discovered that after his last professional year, in 1994, Breu traded one profession for another ... unusual one. As any fine performer he saved the punch line for the end...
He became a comic.