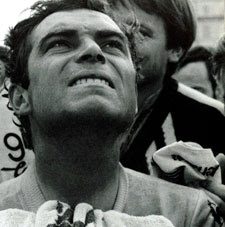 Limiting the damage to his knee.
Hinault in pain decided to abandon the 1980 Tour at Pau.
From:'The Official Tdf.'
Tenacity is an important trait for a racing cyclist. Able to be tough holding fast in a persistent manner speaks only to a special rider.
The 1980 season started well for Bernard Hinault, with a victory at the Giro d’Italia. At the Tour de France, the Badger won his first prologue at Frankfurt. The time trial over the racing circuit of Spa-Francorchamps seem to convey his new dominance. Next, the freezing cold and rain of stage 5 over the slippery cobblestones to Lille never hindered him and he won that long hard march on the pavé, convincingly. But, with every heavy effort comes pain, as Hinault developed tendinitis behind his left knee. It was hard for him to carry on for fear of damaging his knee. He pulled out, while still in yellow before the start of the first mountain stage to Luchon. Joop Zoetemelk inherited the golden fleece but refuse to wear it out of respect. It didn’t last long as the tenacious Dutchman along with his strong TI Raleigh team took over the race and the yellow jersey to overall victory.
The French press lambasted Hinault for quitting the 1980 Tour. Written him off for pulling out. This just pissed off Hinault to a state that he couldn’t wait to ride the World Championship road race in Sallanches. He had something to prove. Before the entry into the last lap, Giambattista 'Gibi' Baronchelli was the only rider that could manage to keep up with the Badger. The Frenchman, with his overwhelming superiority raced to victory. Fired up... by the critical French media. 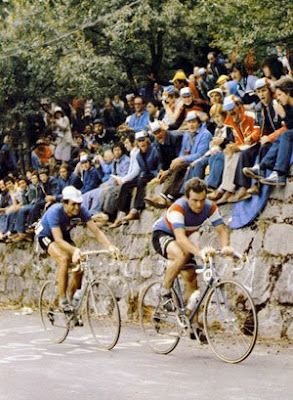 The return of Le Blaireau.
On his way to becoming the 1980 World Champion on the tough Sallanches course.
The Badger silenced his critics by wiping out the field except for 'Gibi' Baronchelli.
From: 'Fabulous World of Cycling.'
“I no longer had any doubts. It was an incredible thing. I was made like that. I don’t think that Michel Platini trembled before he kicked a football. I don’t think that Bjorn Borg brooded as he stepped onto the tennis court. They were killers,” he said confidently.
Tenacity once again!