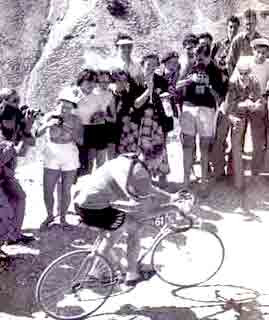 After winning a grueling Giro d'Italia,
Coppi opts out of this 1953 Tour. The Campionissimo(pale shorts) relaxes on the sidelines photographing Louison Bobet!
From: 'Le Tour.'
In 1949, Fausto Coppi had what is probably, his finest season. Among his big wins: first ever rider to win the Giro/Tour double(overall & mountains classification), World Championship track pursuit title, Italian national championship, Milan-Sanremo, Giro di Lombardia. The gifted rider then was voted Italian Athlete of the year.

"He had everything going for him. He was a nice guy, had a certain aura about him. I don't know anyone who didn't like him."

As the 1950 Paris-Roubaix arrived, self pressure to win the Queen was immense. "I absolutely had to win that one. If one wants to make the list of great champions, a win in Roubaix is a must," Coppi would later say. Wearing the National Italian jersey, Coppi took over the race and with 34 kilometers to go, took off on a solo breakaway. Legs like pistons he powered away from the hapless Frenchman, Marcel Diot to a very convincing victory almost three minutes ahead!

"On the bike, he would have an evil streak. Like all the greats, he would make you hurt for the joy of it. But, off the bike he was a great guy to be with."