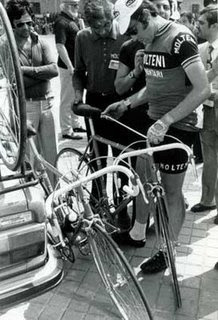 With framebuilder, Ugo De Rosa.
Le Patron measures one of his 17 bikes for another epic
battle. 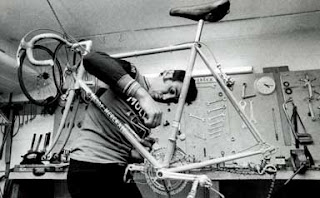 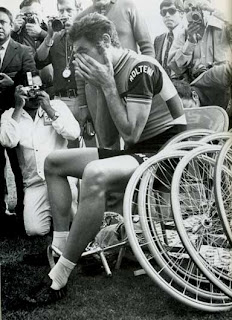 With tires prep.
In deep concentration before his attempt at the world hour record, Mexico City 1972.
Above images: 'Eddy Merckx.'
I must admit that I'm a bit of a gear nut. In fact, my bike and I are fond friends. I'm always tinkering on it, cleaning, tightening this & that and generally taking good care of it. It gives me a sense of satisfaction to have a well cared for bike.
Back in his racing days, Eddy Merckx was to put it mildly, obsessive. His long time confidant/soigneur, Guillaume Michiels said, "He had such energy. He could never sit still. He was always busy doing something. And it was nearly always connected in some way with a bike. I watched him for years in hundreds of different hotels. His waking life consisted of racing, showering, eating and, if he had no other commitments, busying himself with something to do with his job. Any moment there was nothing else he should be doing, he spent concentrating on his bike. It was pure obsession."
Eddy's wife, Claudine added, "It is a cliche, but Eddy was and is always obsessed with bikes. I've known him get out of bed in the middle of the night on more than one occasion and go into the garage to change something on his handlebars or his saddle or gears or something like that. Even when Eddy bumps into a touring cyclist, he starts to chat with him about his position on the bike."
"Eddy had been a pro for one year when he bought all of mechanic Jos Janssen's equipment out of his own pocket. Besides the equipment he received from the team, he also had personal bikes and accessories, too. He always had around 500 tubular tires and 100 wheels, and he kept 35 bikes in his workshop, 15 of which were always ready to ride. I remember us once setting off for the Giro with 17 different bikes of his. He tried out everything and more and was never completely satisfied with a particular solution," Michiels says.
Eddy admitted, "It's true that I kept hundreds of tires at home in the cellar for months on end. I was asked in 1971 if it was true that I had taken a bike apart to find out how many parts it comprised. I answered that it was. I must have been mad. I did find out, though, that a bike is made up of around 1,125 separate pieces."
With this obsession for the bike, he was always ready to race. His professional commitment was inspiring. No wonder he notched up the most cycling career victories ever... 525!
Putting it to good use... 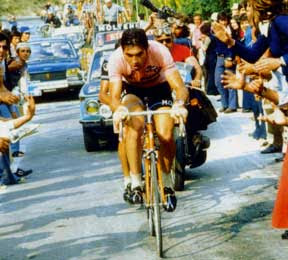 Doing what he loves best, hammering away on one of his trusty steeds.
Merckx at the 1973 Giro. Number 4 out of 5 Giro wins, also taking the points competition and six stages.

The superior look on one of his many De Rosas.
Both images: 'Cycle Sport.'
Eddy Merckx Gear and Equipment Inspiration

KGS Bikes - Kevin Saunders said…
These pictures show us why Eddy is the best cyclist that ever lived. BTW I am going to promote this blog on my http://blog.kgsbikes.com site. Well done!
December 9, 2008 at 6:24 AM