The Unsung Heroes of the Queen. 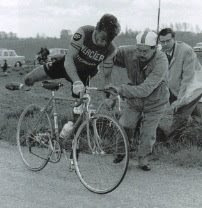 Rolf Wolfshohl gets a needed hand from his trusty mechanic in 1965.
Let’s picture bike and rider going through a long, arduous, mind-numbing, body shaking torture of Paris-Roubaix. The ‘Queen of the Classics,’ is seven years older than the Tour. Its reputation comes from the fact that a third of the route takes riders over centuries of old pave, following a path flattened by Napoleon’s armies. Unlike the battered rider that over time can mend, a damaged bike will probably see its last life in 'The Hell of the North.'

‘After several hours of abuse and extreme conditions on the brutal roads of Paris-Roubaix, most bikes will never be ridden professionally again,’ as mention on the fine film, ‘Road to Roubaix.’

The bikes are given every ounce of care, just like the riders, with hope that they will, despite the cruel conditions, somehow carry their riders over the line in the velodrome. Eddy Merckx’s former mechanic, Julien DeVriesse proclaimed, “Paris-Roubaix is especially a hard race for the mechanics.” 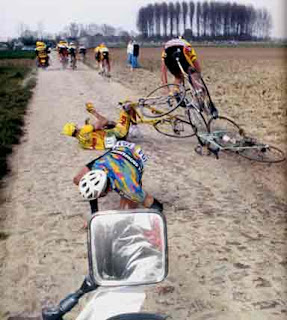 Three more for the mechanics.
Mechanic Gregg Geater added, “Realistically, it’s not a race that these bikes are built for. The race is almost a mountain bike race on road bikes and it’s rough on gears. Wheels get damaged, they (the riders) finished the race on them, but really not good enough for the next races.”
Both images: 'Paris-Roubaix, A Journey Through Hell.'
Their hours are long, well before the race starts. Meticulous attention of setting up each bike for the war on the pave. Afterwards, they are back taking apart the abused bikes stripping it down completely. These exemplary people are a vital cog in that huge wheel called Paris-Roubaix. And, I don't think they  get the full recognition they deserve.
So I say, in my humble bit of gratitude; here's to the hard working mechanics... the unsung heroes of the Queen!
Paris-Roubaix