A Stetson with a Kangaroo. 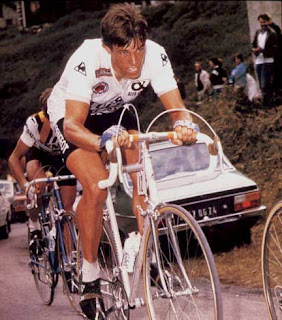 The strong Aussie presence.
Anderson proudly wears the maillot blanc!
I remember watching  Phil Anderson come in to win the Gold medal at the 1978 Commonwealth Games road race in Edmonton. The following year he moved to western Paris and joined the AC Boulogne-Billancourt. It was a professional school for professionals readying them for Peugeot. In 1980, with his apprenticeship over, Anderson graduated to the big time signing with Peugeot. Fellow anglophone, American Jonathon ‘Jock’ Boyer rose through the very same ranks of ACBB, back in 1973. Four years later, in 1977, the determined Boyer joined the smaller French team but with big pockets, Lejeune-BP. The cycling path of the two riders would cross again, into the 1981 Tour.
Both riders made their debut in the 1981 Tour de France. Australian, Phil Anderson known as ‘Skippy’ (after the TV kangaroo) and better yet, my favorite nickname, ‘Dr. Teeth’ with the biggest set of ivories ever to grace the peloton. He already had success in his first year winning the Prix de Wetteren race and a stage at the Etoile des Espoirs. Boyer, was well known in France, spoke French and was cocky enough for wearing a Stetson. He was a lone Yankee maverick trying to fit into the traditional European cycling world. The 25 year old Boyer was a vegetarian, bringing huge amounts of nuts & fruit to races. He stood out. The Tour asked him to wear a special Stars & Stripes jersey. All the better, becoming the first ever American to ride the Tour thus attracting the potentially enormous American market. 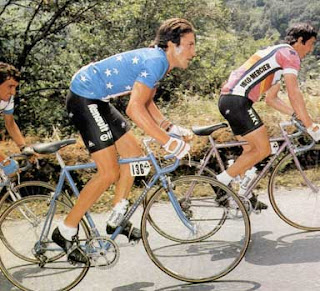 A pioneering spirit: going forward.
Jock Boyer's special Stars & Stripes jersey symbolized the first
American presence at the 1981 Tour.
From: 'Fabulous World of Cycling.'
Anderson's role was to support leader  Jean-Rene Bernaudeau, and soon discovered he had more to give than his captain. With Bernaudeau out of contention, the Aussie finished a formidable 3rd in the Pyrenean stage to Saint-Lary-Soulan. Bernard Hinault was second behind stage winner Lucien Van Impe. After marking Hinault on top of the Plat d’Adet and top placings in the previous stages, Anderson became the first Australian/non-European rider to wear the yellow jersey. Dr. Teeth started to show his fangs. The next day’s time trail finish to Pau, a mere 30 seconds behind winner Hinault was the end of his yellow jersey. The 23 year old Anderson lost it but he was proud of his debut. He even fought hard for the white jersey losing out to eventual winner, Dutchman Peter Winnen. 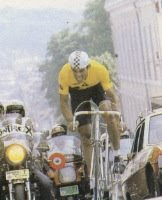 Anderson's golden day.
A strong 3rd place at the time trial stage to Pau.
From: 'Fabulous World of Cycling.'
The Aussie finished 10th overall. Truly a gutsy first Tour ride and he sent a firm message that he was an upcoming force to reckon with. On the other hand, Jock Boyer rode well protecting leader, Hinault. He finished as high as ninth on stage 10 from Le Mans- Aulnay sous Bois. The trailblazing American finished in 32nd place overall enough to leave the door open for his fellow countrymen to ride through. 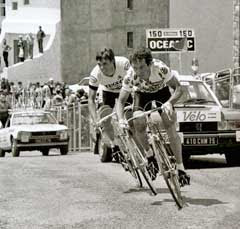 History is about to change...
The cheeky neophyte marking the badger into Saint-Lary-Soulan.
From: 'Tour de France.'
Vintage Tour de France

Groover said…
Not sure if I should say it but there is some strange gossip here in Australia about his well developed chin. Might not be anything to it but who knows?
January 19, 2009 at 1:39 AM