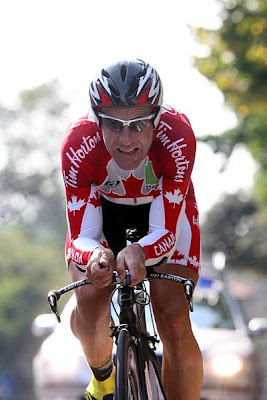 TUFT moment!
Breaking into the medals with a great silver,
2008 Worlds TT, Varese, Italy.
www.cyclingnews.com
Svein Tuft landed nicely into the prologue of the Tour of California, finishing a fine 9th. I admit having read  the articles on line about him made a fan of me.
He came from an unusual background taking his various bikes into the deep, rough country of the Bella Coola Valley in British Columbia. Only 18, at the time, the intrepid explorer stayed out in the wilds sharing it with his dog. Alaska was the next adventure for the young bike tourist. Roughing it out was his calling and he love the challenges of the wilderness. It most likely shaped him providing a natural school of learning about himself. The physical realties are a challenge and simply having to survive each day surely gave him his mental toughness.
Fast forward to 2008: Tuft had a chance to ride the World Cycling Championship TT in Varese and finished with an astounding silver medal. A long time coming since Steve Bauer's bronze way back at the 1984 Worlds road race. Canadians can cheer! Seventh at the Beijing Olympics TT and 4 golds at the Pan American Road & Track Championships rounded off an outstanding year.
Tuft's quiet toughness attracted Garmin-Slipstream to sign him. He liked the anti-doping stance of the offshoot American squad and soon said yes. I must say that he's the type of guy that would look comfortable in a lumberjack shirt clearing forests. Garmin knows he can get the job done especially on the pave of Paris-Roubaix & this summer's Tour. As he embarks on a new journey in California with a new team, I'm proudly waving the Maple Leaf and thinking that he could pull off more sensational victories somewhere down that cycling road!
Svein Tuft Tour of California

Jason said…
I've just finished listening to an interview with Tuft. He seems like a nice guy. You can hear the interview here:

Richard said…
Thanks for that. Here's another low key interview done inside the team Garmin car: