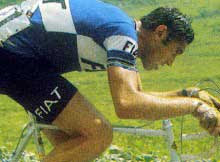 Merckx grinding it out at the 1977 Tour.
One of my favorite cycling jerseys is Fiat from 1977. I always like that simple blue & white timeless classic. 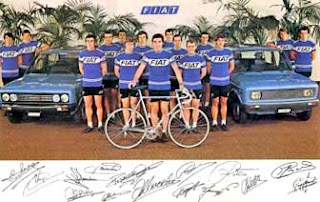 The 1977 Fiat Team with the Cannibal
at the head of this pack!
Again, with Ugo De Rosa supplying the bikes.
www.cyclingwebsite.net
Molteni-Campagnolo was tres dominate during the seventies and for good reason. A certain Eddy Merckx led & won many races under the Italian sausage maker name. After the 1976 season, Molteni stopped its sponsorship and Merckx was left to search for a new one. The Cannibals reign was coming to an end, but with a fresh new team glory could be his, again.
The Italian car maker, Fiat arrived and provided sponsorship becoming Merckx's fifth professional team. Italian teams had a very good relationship with the Giant. Teaching him the cycling basics: care, preparation and feeding. Wisely, Merckx surrounded himself with his old trusted domestiques: Huysmans, Swerts, De Schoenmaecker, Bruyere. He was reunited with his old friend, the great six day track racer, Patrick Sercu. The Belgian Sercu, known as the 'kaiser of the six' won an astounding record 88 track events out of 223 starts. He was twice world champion in the sprints and won the gold medal for the 1000 m time trial at the 1964 Tokyo Olympics. He used his searing sprint to win the green points jersey at the 1974 Tour. Merckx teamed up with him to win many winter track events. Now, they were both destined to ride together in the 1977 Tour. 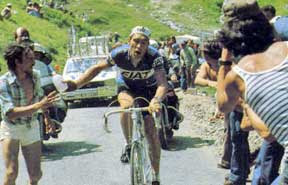 The mountains added to his suffering...
With the advice from his manager, Geminiani, Merckx rode a light 1977 schedule as preparation for the Tour. Fresh from winning the Tour de Mediterranean, he entered the Tour as a non-favorite. His new team, Fiat looked a good adversary on paper. But, were they strong to contend for victory?

Nineteen seventy-six Tour winner, Lucien Van Impe, Bernard Thevenet and Joop Zotemelk were the favorites going into the prologue. Merckx almost won the time trial finishing a feisty 8 seconds back in third place behind winner, neophyte Didi Thurau. Entering into the 4 kms team trial, Fiat flew and won it in front of Peugeot and TI-Raleigh. Patrick Secru didn't disappoint and won three stages before abandoning on stage 17. But, the col de Madeleine was a tremendous hardship for Merckx. Stomach problems forced him to lose a massive 13 minutes during the grind up the Alp d'Huez. Thurau and Thevenet proved too strong for the ailing Merckx and left him behind to struggle. But, Merckx outfoxed all and won his only stage into St. Etienne after the first and second place riders were disqualified after failing anti-doping tests. The irresistible Merckx proved that he can be a great loser.
Fans applauded the Cannibal's last Tour as he bowed out to finish in a glorious sixth place! 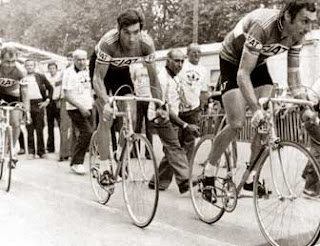 The Fiat team time trial off to victory.
Secru(right) & Merckx back together, again! 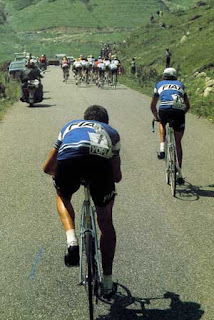 Off the back of the pack & paced back by his faithful domestique, Jos de Schoenmaecker.
All from: 'Fabulous World of Cycling.'
Eddy Merckx favorite jersey's Vintage Tour de France

AMR said…
That's a great piece of cycling history, thanks for sharing!!!

Unknown said…
Another great post. Thanks for the research, takes me back in time.
Craig
February 2, 2009 at 7:31 PM

kelvin newman said…
wonder if you can get, reproductions of the jerseys they look the smart
February 3, 2009 at 3:39 AM