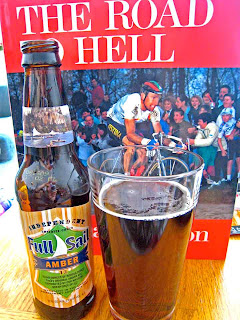 Full Sail on The Road To Hell!
Portland & the entire state has three love affairs going for it. Ok, the weather is conducive to relaxation with great coffee culture, independent bicycle frame building, & the largest amount of microbreweries in North America. There's too many to list as the Rose City and state is hopping crazy! The Craft brewing industry has given Oregon a new title, 'Beervana!' How good is that! Craft beer is an American term which refers to beer that is brewed using traditional methods steering away, thankfully, from the mass-produced beers. 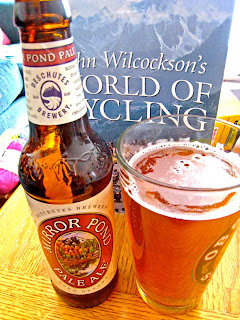 The Mirror Pond Pale Ale is a fine reflection
to World Of Cycling!
For the first time, I enjoyed a delicious elk burger and 'Mirror Pond Pale Ale' at Deschutes Brewery pub. The Cascade hops give this pale ale a nice floral aroma that goes along with pretty much anything! And, what a thirst quencher it is ...one is not enough. Next up was 'Full Sail Amber.' Another liquid sensation full of spicy, floral & malty notes not light at all. A nice heavier body thoroughly satisfying! At the local Fred Meyer supermarket, we gravitated towards the beer tasting offerings touting some of the local microbrews. Unfortunately, we were only allow to sample two of the three choices. We left happy and packed enough beer for our drive back over the border.
One eating establishment that left a very good impression was the funky, 'Byways Cafe.' We loved the kitschy decor and the friendly service but, the delicious blue corn pancakes with maple syrup and walnut butter was an instant hit. I would go back again just for it!
Portland must have one of the finest independent used & new bookstore that I ever visited. It's called, 'Powell's Books,' a nice oasis in the urban jungle. I was attracted to the bicycle section and found two inexpensive tender morsels. 'The Road To Hell,' by Graham Watson is a pictorial smorgasbord of the Classics. Number two book is John Wilcockson's, 'World Of Cycling.' A chronicle of the author's thirty odd years of cycling.
One interesting coffee shop had a notable service worth mentioning. I believe it was called, 'cycling triage,' where folks could bring in their bikes for free basic maintenance. Not bad, get caffeinated & have your bike tuned up at the same time.
Now, that's progressive!
My essay; Byways Cafe... 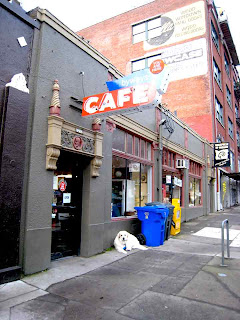 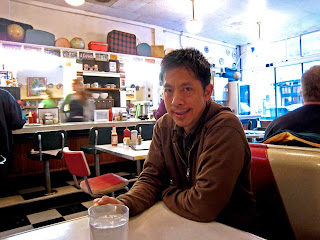 For me,
first thing is a good cup of coffee... 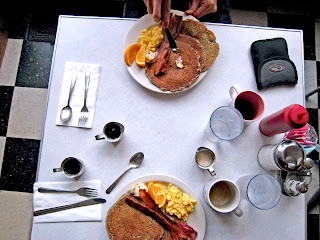 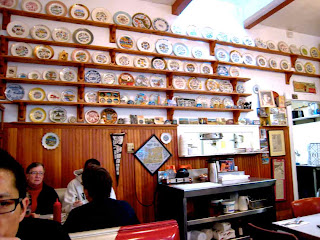 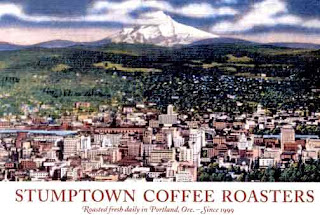