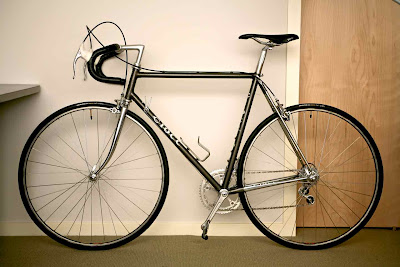 Remember when Demetri from Veloce Bicycles, on my memorable visit to Portland, mentioned to me that he sold a Ciocc steel bike?

Doug Meyer is the fellow that had just bought the 1983 Ciocc racing bike on my visit to Veloce Bicycles. We actually crossed paths and I just missed him and his prized steel Ciocc by a matter of mere minutes.

Ciocc (CHEE-OH-CH) was founded by Giovanni Pelizzoli who was a former apprentice of Ugo DeRosa. Ciocc is from a local Italian dialect which means, ‘poker faced.’ The familiar badge of 4 aces in cross formation was born. The factory is in Mozzo, Italy ten miles close to Colnago’s. The most celebrated model was the Mockba 80 after Ciocc built the frames for the Polish National team. Poland’s Czeslaw Lang came in second place on a Ciocc during the 1980 Moscow Olympics Road Race. Back in 1977, Italian Claudio Corti won the 1977 U23 Worlds on a Ciocc at San Cristobal, Venezuela. The San Cristobal is their signature model.


The other day Doug was kind enough to send me an email and said that he was without a road bike since his 1991 DeRosa Diamante was stolen in 1998. I’m glad he finally got his Italian steel bike!

erikp said…
I've just bought a well-used mockba '80 frame, and am starting to build it up. I personally like the broken in look. Anyway, in doing some research before purchase, its more likely pronounced che - oh- ch as one syllable. That's the way Pelizzoli pronounces it in a video here. http://www.youtube.com/watch?v=SJHwPqn2jY0
December 11, 2011 at 9:41 PM