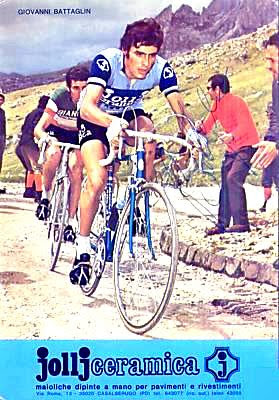 1973 Giro.
Italian neo-pro Giovanni Battaglin, leading star Felice Gimondi.
www.cyclingwebsite.net/
Italian great, Giovanni Battaglin rode the 1972 baby Giro, the amateur Giro d'Italia to victory and the next year was signed up for his first professional team, Jollj Ceramica. Only 21 years old he was a promising talent as he prepare to battle against the Cannibal at the 1973 Giro d'Italia.
That year, Merckx had already won the Vuelta and headed into the Giro gobbling up six stages leading from the start in Belgium to the finish in Trieste.
"That was the era of the Cannibal, when he rode for Molteni and led the Giro from start to finish. I also rode consistently well and finished on the podium. Felice Gimondi was second behind Merckx and I was third at 10-20 in my first season as a pro," added Battaglin. 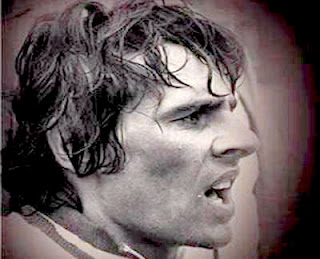 A hard fought first Giro!
He almost won his first Giro stage coming a very close second behind Gimondi on stage 18 to Monte Andalo. In fact, he lost by half a wheel to Italian champion, Gimondi. And, when asked how it was as a 21 year old neo-pro to ride head to head with Merckx, Gimondi & Jose-Manuel Fuente? 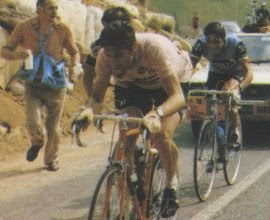 The young Battaglin (far right) staying in contention with Super Merckx.
From: 'The Fabulous World of Cycling.'
Battaglin said it best, "I had a lot of admiration for them. They were untouchable but the reality was that I was right up there with them, so I just had to ride. I just had to go for it!"
This was a start to a great 11 year career as a professional!
Felice Gimondi Giro d'Italia Italian riders Jose-Manuel Fuente