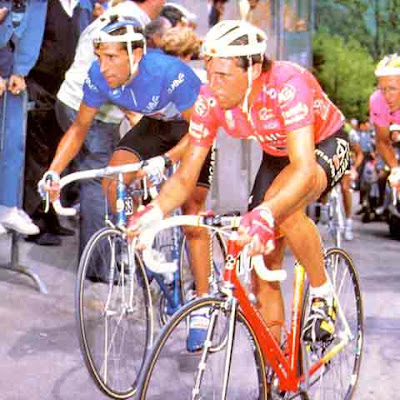 Climbing with ease?
A closer look showing Giupponi on the new Colnago with
the distinct double tubes.
Twenty years ago at the 1989 Giro d’Italia, Flavio Giupponi (Malvor-Sidi) was a heavy Italian favorite for the overall. He was second the year before and fifth in 1987 and served as lieutenant to former Giro winner, Giuseppe Saronni. Under the tutelage of Beppe he finally came into his own showing great prowess to win the big race at home. Saronni’s career was on the downslide and the younger Italian showed promise. He was a very good climber and expert rouleur. And proof of his talents shone with a gutsy win under horrendous conditions of wind & rain on the mountainous stage 14 to Corvara. 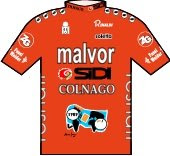 Malvor-Sidi, 1989.
The team introduced a special Colnago in their arsenal!
Giupponi had a two wheel secret weapon in the guise of a new Colnago ‘Carbitubo’ frame. Colnago introduced this new carbon frame with a rather odd double oblique down tube for increase rigidity, useful for the sprint and riding safety. Ernesto Colnago reduced the weight, with the use of carbon, and allowed the rider to transfer his power to the wheels by saving energy. Working closely with his star rider, Saronni, a radical if not better Colnago bicycle was created. Colnago wasn’t alone, he seeked help from Ferrari Engineers. Cylindrical tubes were devised to give chief Malvor-Sidi riders’ (Saronni & Giupponi) an edge. The carbon fiber tubes were screwed and glued with an aeronautic compound to the aluminum fittings. As a result, greater riding stability both on the flat and downhill for the rider.
Flavio Giupponi rode that Giro, well. Only to find one Laurent Fignon unbeatable. Giupponi finished the 1989 Giro in second place… with a little help from Colnago! 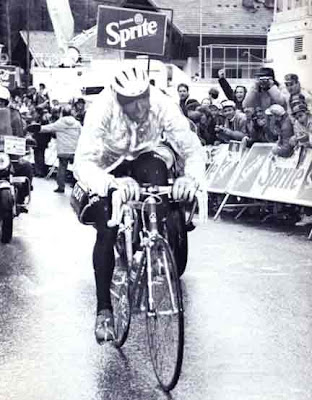 Giupponi slogging to a stage 14 victory into Carvara on the Carbitubo.
Giro images from: 'Tour 89.' 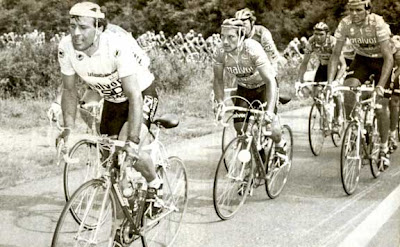 Saronni protected between his two teammates on the Colnago Carbitubo. 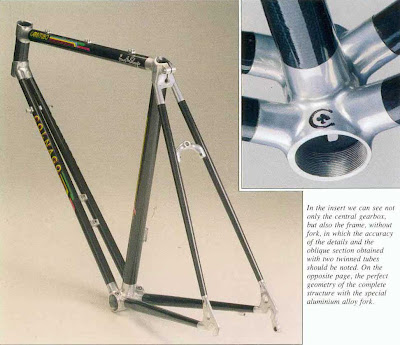