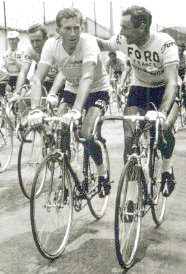 Denson(right) & maglia rosa, Motta at the 1966 Giro.
Vin Denson, nicknamed 'Vic.' Because 'Vin' means wine in French.
Became the first Briton to win a stage at the Giro.
I watched Carlos Sastre conquer today's exciting Giro stage to the top of the inactive volcano Mt. Versuvius. An impressive solo win for the Spanish grimpeur, his second of the race. I couldn't help but think how it would be just to win one stage in this great race...
In 1966, Vin Denson riding for the Ford-France team had that very chance. Denson was given the orders to ride and protect teammate Julio Jimenez after the spaniard became maglia rosa after winning stage two. Protection was hardly enough as the partisan Italian fans pelted the two hapless riders with garbage. The problem was that a non-Italian was wearing the maglia rosa!
During the evening team dinner before stage nine, Denson had asked for an extra helping of pasta and promised that he would win. Joke or not, Denson won that 210 km race to Campobasso. He became the first Briton ever to win a stage of the Giro.
The next day's questionable headlines read, 'La droga de Denson e un piatto di ravioli ... Denson's drug is a plate of ravioli!"
Gianni Motta Giro d'Italia Italian riders