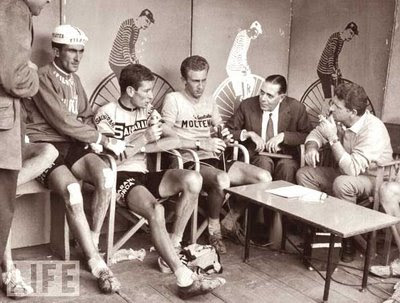 1966 Giro d'Italia interviews.
(l to r): Bitossi, Gimondi and race leader Motta.
www.jamd.com
Gianni Motta looked quite likely the next champion his fellow countrymen yearn for. In his first year as a pro he took a smashing victory in the tough 1964 Giro di Lombardia, the "race of the fallen leaves." Fans were already talking Campionissimo. For cycling mad Italy were still mourning the loss of their beloved Coppi, since 1960. The fans got more in return in the 1965 Tour de France. Motta came ever close (3rd) behind winner, Felice Gimondi. Could Motta & Gimondi be the two burgeoning heroes for a weary Italian nation?
Perhaps, 1966 was Motta's crowning year as he won the Swiss stage race, the Tour de Romandie. His early good form translated a week later at the Giro d'Italia. He grew increasingly stronger by forcing the feared Jacques Anquetil into submission. Motta took two stages, the points classification, the overall and relegated beleaguered Maitre Jacques to third overall behind compatriot Italo Zilioli.
As all good things stood, Motta then became uncharacteristically, enigmatic. In 1967, on advice of an eccentric doctor he adopted the diet of ... the American astronauts. The promise of fantastic results was his if he followed a quirky training regimen. He would ride some 500 kms a day eating hardly anything...
During the 1967 World Road Race in Heerlen Netherlands, Motta lost due to fatigue, and came in fourth while doing a large portion of the work. Merckx won that race for his first of three World cycling titles. Later that year, Motta would claim a rare success at the Tour de Suisse and further on in 1971, his last major win at the Tour de Romandie.
Gianni Motta rode on with unfulfilled greatness. The promise of winning soon gave way to disappointment for his fans and he never did win the number of races expected of him. By 1976, Motta retired and manufactured his own bikes. 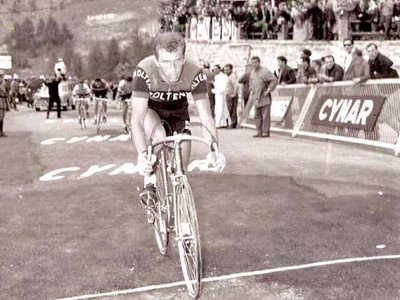 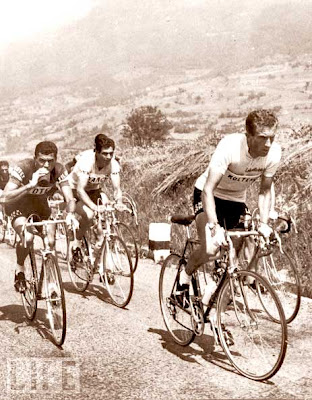 Out in front wearing the maglia rosa! 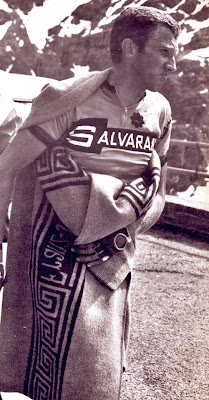