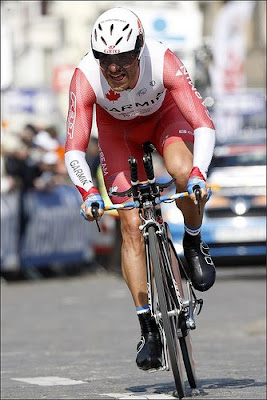 Svein Tuft in his patented tuft mode at this year's 3 days of Depanne.
I was talking to Guy(Le Grimpeur) via email about Svein Tuft's tough luck not to be selected on Garmin's Tour team. However, it's good to see strong & steady Ryder Hesjedal & Kiwi Julian Dean for the Tour. Tough luck that Svein's off the team for Le Tour. He'll be missed as he has the super motor to help guide the team in the time trial & his invaluable support as a super domestique. Injuries have slowed him this year especially the serious concussion at the Tour of California. But, yesterday at the Canadian Nationals in St-Georges-de-Beauce, Quebec, he's like his old tuft self by winning the 40 kilometre men's elite time trial! His fourth gold medal in the last five years. Teammate Christian Meier was second.
Funny story about Meier and Tuft is that they live in a separate trailers beside each other near Langley, British Columbia. The Garmin team calls them the trailer park boys after the Canadian mockumentary tv show.
Garmin has stated that Tuft will be in for the Vuelta and the World's in Switzerland. And with a little tuft luck he'll do another great ride this weekend in the Canadian men's road race...on his comeback road!
Ryder Hesjedal Svein Tuft