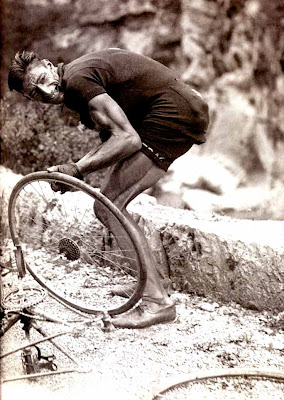 Ferdi Kubler looks stressed as he repairs his flat,
Stage 16 to Briancon, 1949 Tdf.
Back in the early Tours, rules forbade any outside help!
From: 'Telerama-Hors Serie, La Folie du Tour.'
On my return from a hot yet fun two hour ride a cyclist was on the side of the road and stopped me and asked, "Do you have a pump?" He was stranded with his wife & two kids by the side of the road. I couldn't ride past them and quickly did what any cyclist would do and stopped and handed him my hand pump. While he worked furiously on his flat his wife was beside her bike that pulled a cart with their two charming kids. They looked relived that I stopped by. Funny, we had a nice chat as she asked me where I was riding. I said that I was finishing a two hour ride from the University of BC and was now returning back home for a nice cold beer. Her husband gave up and discovered a slow leak just around the stem. And he also didn't have a spare tube. They both thanked me and he said that he was ready to walk his bike back home, a short distance away. I wished them good luck and rode back home looking forward to a reward for my kind act.
No beer, yet I had ice cream with strawberries, instead!
fun rides