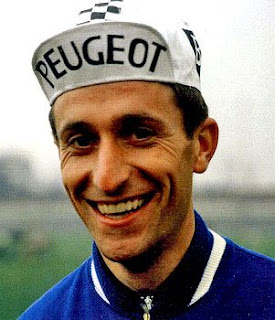 With the Ventoux back in this year’s Tour, I can’t help but think of Tom Simpson. He died on July 13, 1967 atop the climb of the legendary volcano in what now is the famous black and white film footage we all know. Both gritty and tragic is what we have left of Simpson as he staggers before he collapses with mere seconds left. The most frightening moment in cycling history.

Currently, I’m reading the fascinating book, “Put me back on my bike. In search of Tom Simpson.” A well written and captivating biography by William Fotheringham. His 1962 Tour was both wonderful yet harrowing as he became the first Briton to wear the Yellow jersey. Although he wore it for one day he caught the attention of the European cycling world. And rightfully so. But his race turned sour as he crashed and lost third place to finish only sixth overall. His next three attempts at the Tour was laden with bad luck...

In 1964, he rode with a tapeworm weakening him to 16h overall. The following year, in 1965, a blood infection caused him to quit the race. During the 1966 Tour, a crash on the descent of the Col du Galibier had him abandoned in tears while wearing the rainbow jersey of world champion. As he entered the 1967 Tour, Simpson was determined to wear the Yellow jersey at any costs. Weighed down by chasing after a new contract for the following year, he knew that it was critical to win a stage & wear the Yellow jersey.

The world lost a fine rider that day! 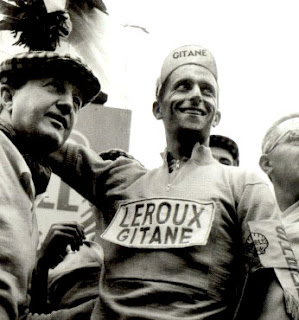 Jah Hollis said…
A truly sad ending of a fascinating story.
A friend asked me if there is any known connection between "Major Tom" Simpson and the character Major Tom in David Bowies hit song Space Oddity that was released a couple of years after Tom Simpsons death on the mountain.
Do You know?
July 27, 2009 at 1:36 AM