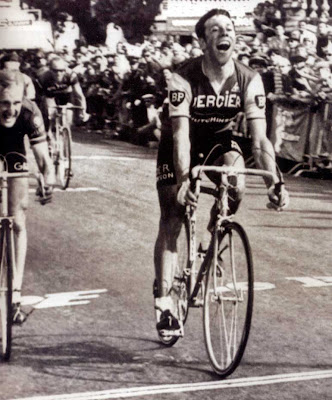 A Dash to Success!
Hoban's sprints to his second consecutive stage win, 1969 Tour.
From: 'Cycling's Golden Age.'
A record was tied after today's Tour stage 11. The Manx Missile, you know who, tied the British record for eight Tour stage wins with Barry Hoban.
Hoban was an accomplished Tour sprinter and competed in 12 editions between 1964 and 1978. Cavendish only in his second professional season took his fourth stage from a ever charging Tyler Farrar. He looks destined for another with his seemingly tireless sprint. On the other hand, with the drama increasing, Farrar looks closer to a sprint win as his lead out guys; Millar & Dean took him within a bikes length to victory. Onward to stage 12 and we'll have another dramatic sprint showdown.
I'm sure Barry Hoban won't mind if the record's broken! 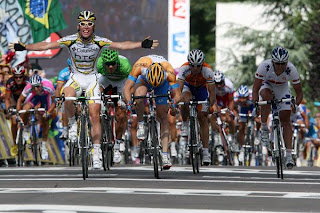 Mahmood Syed Faheem said…
Your blog is very nice. The photographs are very beautiful. Wish you all the best. God is Great.