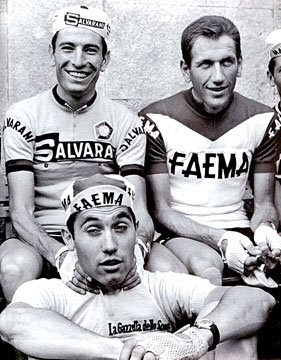 The top three, 1968 Giro.
Felice Gimondi always made Eddy Merckx aware he was there.
Merckx was first, Gimondi second & Vittorio Adorni (top right), third overall.
Eddy Merckx had a nemesis in Felice Gimondi. They both started their careers in the same year (1965) and ended it in the same year (1978). The first three seasons proved stellar for the Italian as he won the Tour de France, Giro, Paris-Roubaix, Paris-Brussels & Tour of Lombardy.
An impressive palmares for the new star. Then, Merckx arrived.
Gimondi said, "His rise really affected me mentally. In 1967 and 1968, it was starting to become very clear that a time would come when he would enjoy an unprecedented dominance of the sport. My own rise to prominence had been rapid, but suddenly mainly to Merckx I had to settle for much less. In the end, I manage to get the dirty swine Merckx out of my head and tried to take my chances as they came. Merckx taught me that you don't have to be a leader or the absolute No. 1 figure to reach personal goals in life. We would never dream of getting involved in illicit combines or arrangements. We always rode in a straightforward way, and we never rode with the sole intent of seeing the other one lose. He's a man after my own heart, that Merckx."
And Merckx praised his adversary, too. He said that he was amazed how Gimondi handled himself ... always as a true professional.
Eddy Merckx Felice Gimondi Italian riders