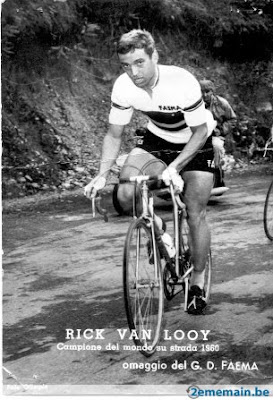 He'll be calling for a café soon...
No Coffee for the Emperor but definitely a Stella!

As I was enjoying a Tuborg, my reward after a good two hour ride, I was reminded of a story of how beer was used in context with the Tour de France. One guy who knew that a cold brew was an everyday race staple was the great Rik Van Looy.
During 1964, Britain's Vin Denson was hired on to work for Emperor Rik on the Solo-Superia team. Van Looy was notorious for cracking the whip and keeping his riders in line for him. He won a great many races under his authoritarian rule. Van Looy loved his beer, especially for Stella, and ordered his riders to go for long miles for his favorite beer. Denson once said, "You did whatever he wanted, including the fetching of beers, which he had great fondness for."
As the story goes, when Van Looy shouted, "Denson... Café, Café!" Denson would react and go to the nearest café and fill his bottle. Back in this time, it was customary for the domestiques to go café raiding. Everything drinkable was taken: beer, champagne, soda pop & mineral water. The shop keepers were more than happy as the riders stopped by only to be ecstatic to send the bill to the Tour.
Denson reached his thirsty captain and gave him the waterbottle. Van Looy had a good sniff felt the warmth and poured it on the road. One important advice no one told the young Denson, that café can mean beer as well as coffee! 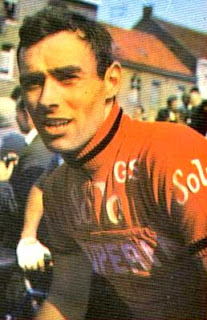 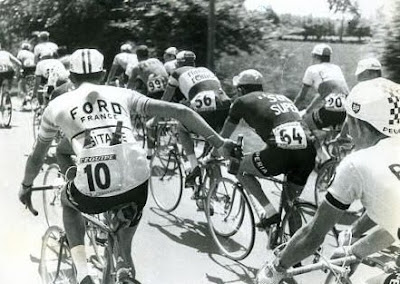 How about a cold one?
A domestique at the 1965 Tour de beer.
Beer Vintage Tour de France