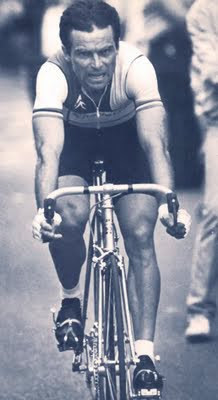 Looking good with a fresh start...
New team and a victory in the 1984 Tour prologue TT!
From: 'Tour 84.'
After a successful stint with Cyrille Guimard's Renault-Elf-Gitane team, Bernard Hinault began with his brand new team for 1984. The Badger was hungry & confident to return after missing six months due to a knee injury. The team was out in the forefront under the guidance of the great eccentric Swiss coach, Paul Koechli. And, who better to back it up than millionaire entrepreneur, Bernard Tapie. Hinault signed a three year contract worth a whopping 10 million francs($1.14 million USD). The team was named after one of Tapie's chain of health food stores, La Vie Claire.
The team commissioned a designer from Benetton who came up with the eye-catching adaptation of Piet Mondrian's, Composition 'A'. An instant hit! Hinault beamed, "It was something of a revolution, which was just what we wanted. It was a symbol of our intention to stand out from the other teams and to brighten up the peloton. People were shocked at first but then it was widely copied, as you might expect, which just goes to show that there's nothing wrong with a bit of imagination."
The Badger even thought about details concerning the team bikes. When he formed his new team he founded his own club. He was the only member with a license. He called it Rainbow 80. Symbolic for his 1980 world championship win at Sallanches. In France, every rider must belong to a club. And, on the head badge of the teams' Reynolds 753 steel frames was chastised, Rainbow 80.
The Badger did it his way!
La Vie Claire at the 1984 Tour ... 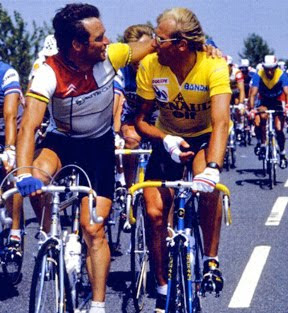 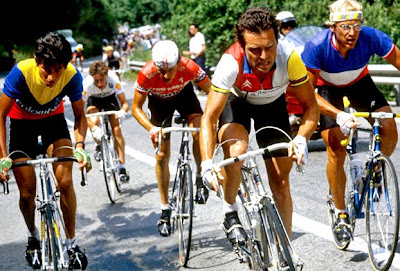