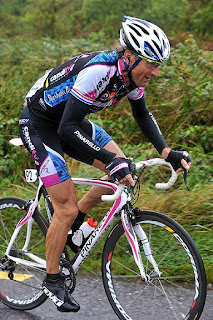 OLD? HELL NO!
The Sheffield Blade going well at stage 3, 2009 Tour of Ireland.
Forty-eight year old, Malcolm Elliott has to be the oldest active professional rider. His longevity in racing against many of his competitors half his age is amazing.
Case in point: His brilliant stint this August at the Tour of Ireland is further proof that this man can keep ticking... like a Timex watch. He finished commendably in 21st overall. Not too bad for an old guy. But, he's not like any other old guy!
Malcolm Elliott out sprinted a certain Steve Bauer by just one second to win the gold medal at the 1982 Commonwealth Games Road Race in Brisbane. The talented Briton appeared destined to become a professional and broke into it in 1984. He was part of the first Pro British team to take part in the 1987 Tour de France. It was an financial mess as the sponsor pulled out and stopped paying the riders. Only three team members finished. Elliott finished in 94th overall. His nicknamed is, 'The Sheffield Blade,' known for his sprinting abilities that won him a huge amount of races. Joining the lucrative paid Spanish teams was pressure filled and rewarding. Stage wins and the point's competition jersey at the 1989 Vuelta added to his palmarés. But, it had to eventually stop.
At the age of 36 he retired from the sport he loved. Time off, six years to be exact, heals most wounds but it hurt to be away from racing. Elliott missed it and came back in 2003 at 42. In 2006, he became UCI road masters world champ. He's like the famous Timex watch slogan; 'It takes a licking but keeps on ticking.'
Move over Lancey! 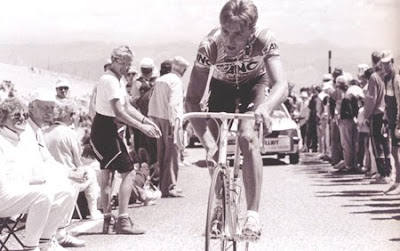 Anonymous said…
Thanks for mentioning Elliott. It really is phenomenal to see him still racing at a high level at the age of 48 years old.

It would be intersting to know who holds to record as oldest pro ever. I'm sure Elliott would be near the top.
August 31, 2009 at 7:46 AM

Richard said…
You know, I believe he is the oldest pro. He has my respect!!!