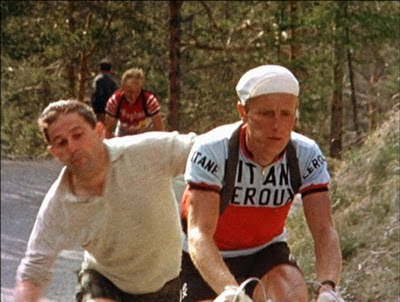 The all too familiar blank stare...
There's plenty of riveting pain in Louis Malle's, "Vive le Tour!"
My eyes brighten up when I viewed Jason's fine Velorunner post about the excellent Louis Malle film, "Vive Le Tour." Up to this point, I've only read about this short poetic film of the 1962 Tour. I haven't seen it, until now. My next move was to borrow a copy of the video from the local library and I now finally have it!
This film is a definitive look at the 1962 Tour, both grueling and fun, with great music by Georges Delerue. The camerawork is dead on perfect as Malle negotiates wonderfully on the riders and spectators capturing Le Tour in it's greatness. It's not all fun and games as Malle captures the disappointments, too! Crashes, a doped rider, Rik Van Looy's sobering aftermath following a crash & the delirious journey of a hapless rider that refuses to quit. And of course, I love the old wool team jerseys of that time.
At only 19 minutes it's a ... Tour de Force!
Artists dvd favorite jersey's fun Inspiration Vintage Tour de France