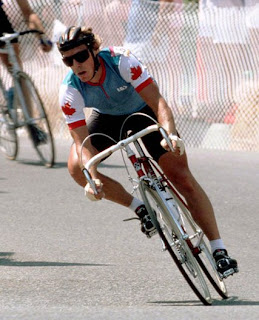 1984 OLYMPIC SUCCESS!
Twenty-five years ago, Steve Bauer woke up a nation with his silver medal at the 1984 Los Angeles Olympic road race. It was hot that July 29th day and I was glued, like most of us Canucks, to the TV cheering on this young man. I followed the upward path of this ambitious & talented rider. He was already more well known in America. Riding and winning many races for the famous G.S. Mengoni team. Steve knew of the famous & wise Fred Mengoni and smartly joined his team to learn the intricacies of bicycle racing.
His final surge to 'win' the silver medal was simply the turning point in Canadian cycling. The shot in the arm we needed. For a relatively small cycling nation we suddenly stood up and was noticed. And, he continue his success further when he won the bronze at the 1984 World Championships. We were euphoric. I just want to give Bauer's silver lining victory that importance it richly deserves. He was the pioneer paving the way for Canadian cycling. Bauer Power was born.
Today, Canadian cycling is doing quite well. Both men's & women's teams are achieving success on the world stage. In a way, Steve Bauer's victory was our victory. As heart wrenching to watch him miss out on the gold medal, we can be comfortably happy in the fact that Canadian cycling grew from that silver victory!
The start of 'Bauer Power!'

On the way to greatness!
Inspiration Olympics Steve Bauer