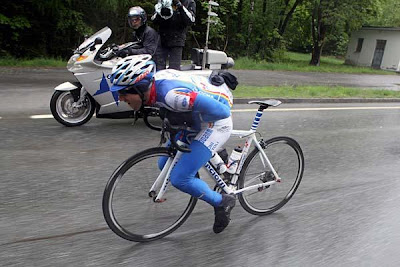 Risk taker in the rain...
Alessandro Bertolini showing his descending skills at the 2009 Giro!
www.cyclingnews.com
Elite bike riders are an amazing bunch. Imagine racing down a mountain on your bicycle at sixty miles per hour. The pack precariously on ultra light bicycles with narrow tires as wide as masking tape with only lycra to shield one from a date with road rash. And just to make it harrowing is your trust in four thin brake pads for stopping power. Hit the brakes wrong and the rider will sing a different tune.
My admiration is for the riders' resolve. It's not mystical. Racing cyclists know that it's inevitable that they will fall careening fast downhill. Some have practice falling to avoid broken bones. These professionals all have one thing in common; they're all very courageous. A trait absent in most mere mortals.
Sean Yates was well known for his prowess going downhill. He was a big guy and wasn't the lightest rider. As he struggled upwards on a climb he would fall like a rock screaming confidently down. He seemed to read the road clearer. Yates called it "soft focus," the ability to see the whole road, all obstacles, while concentrating on technique. Perhaps an affinity for death?
Heroic ... I say!
Inspiration