Passing of the torch. 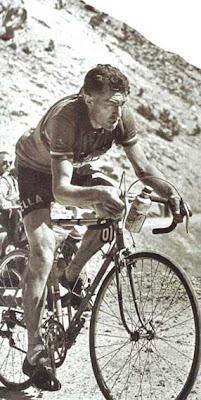 Moving on to Briancon, 1953 Tour...
After this stage, Bobet will take the yellow jersey!

I'm finishing up the fine book, 'Tomorrow We Ride', by Jean Bobet. He recounts with warm sincerity his days with his famous brother Louison. It got me thinking of the great French rider that won three successive Tour's from 1953, '54 & '55. He was the first ever to do this. Even so, the great Italian rider, Gino Bartali said after his famous 1948 Tour victory that Louison Bobet will one day be a winner of the race. Was it divine knowledge?

In the 1948 Tour, Bobet wore the yellow jersey with gusto taking it for nine days before losing it to Gino 'the pious' to Aix-les-Bains. Under the master, Alfredo Binda, Bartali won his second Tour. As for the young Bobet he put forth an important footprint for all to witness. He won two stages and finished in fourth overall. A future king in the making.

Fast forward to 1953, France hasn't won the Tour since Robic's liberating win in 1947. Now, Bobet was ready and also had a constant nemesis to contend with, painful boils. His doctor operated on him and he was ready to conquer the mountains. After Robic's nasty fall that caused him to drop out after stage 14, Bobet took advantage and won the Briancon stage and the yellow jersey. After six attempts, the Tour was his.

For Bartali, his graceful reign was over, at 39 years old, finished his 8th and last Tour in eleventh. A symbolic passing of the torch occurred. Louison Bobet stood as number one son marking the 50th anniversary of the Tour...

And, gave the French more reason to celebrate! 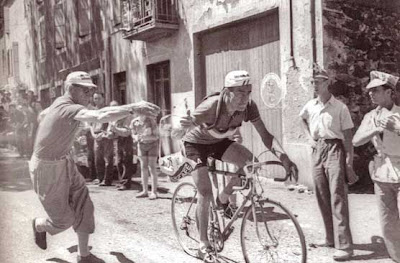 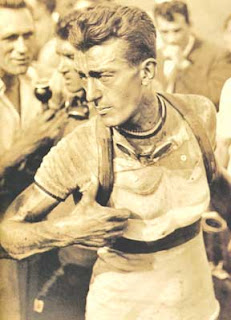 Frenchman in waiting...
The promising Louison Bobet at the 1948 Tour.