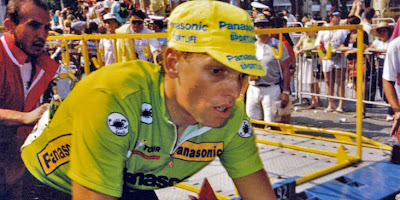 Stardom for...
East German, Olaf Ludwig as he wins the green jersey, 1990 Tour.
Twenty years ago, a Russian revolution bulldozed through East Germany then across the Eastern Bloc. The Berlin Wall crumbled and with that a new sense of optimism. The Communist cycling programs had its share of incredible riders. German Reunification & Russian ‘glasnost’ gave way for their most talented riders for the big time… Le Tour de France.

The Soviet Bloc was disintegrating and a new cycling world was opening up. The 1989 Giro d’Italia was the first grand tour to invite the all Russian team, Alfa-Lum. Two Soviet amateurs finished in the top twenty. And the Alfa-Lum squad finished 3rd overall in the team standings. Notable success. 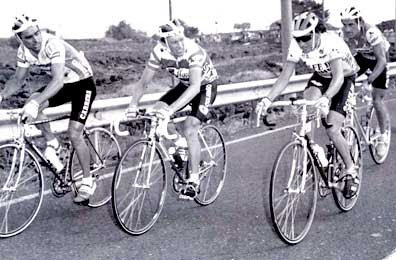 A first taste of honey...
Soviet Ivan Ivanov (2nd from left) looks over at
Lucho Herrera, 1989 Giro d'Italia.
Tour organizers took a cue from the Giro and in 1990 made internationalization of modern cycling closer by inviting the Alfa-Lum team. Even former East German amateurs turned professionals for teams: Panasonic, PDM & Chateau D’ax.
The Colombians were here, too. When in 1983 they first rode the Tour as amateurs. Now, the Soviet riders made the first move. Viatcheslav Ekimov wore the white jersey of best young rider for ten stages. Ekimov was a huge talent riding for Peter Post’s Panasonic team. He was known as, ‘Moser of the Amateurs.’ An accolade well represented on the track winning Olympic and World gold medals.

Dimitri Konyshev was impressive. You may remember him from the 1989 World road race in Chambéry, sprinting for a well earn silver medal behind winner Greg Lemond. At the 1990 tour, the fast Russian won a stage & wore the polka dot jersey for four stages. His teammate, Djamoldine Abdoujaparov also got his first taste of the Tour. And would return to be the unstoppable sprinter from Uzbekistan.
It was the right move for the Tour to do. Capitalizing on a failed Eastern Bloc. The race was more exciting as ever. As East German, Olaf Ludwig, started his career as a serious amateur. He won stage 8 into Besançon and to cap it off won the green jersey at his first Tour. Thus, becoming a serious grand tour jersey winner.
These new professionals were a mirror reflection of their mighty sports programs. They were tough, adaptable and quite capable to compete with the rest. With the advent of the new world order in 1989, the large cycling window of opportunity opened for them …and equally important with a promise of freedom! 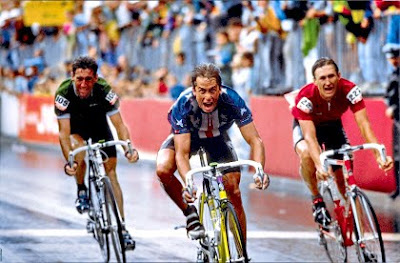 A Long and Winding Road...
Dimitri Konyshev (far right) means business as he
rushes for a fine silver medal
at the 1989 World Road Race, Chambéry.
In good company with Greg LeMond(1st) & Sean Kelly(3rd)! 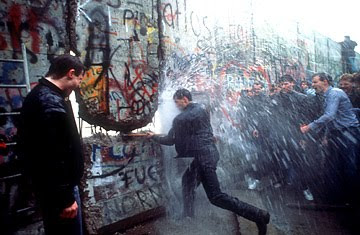