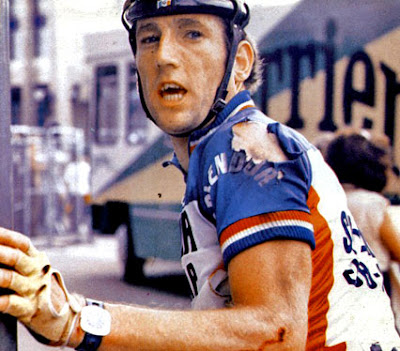 Hanging on by the skin of his back...
Kelly was the eager sprinter but it wasn't a 'Splendor' ride!
From: 'Fabulous World of Cycling.'
Early Hiccups for the Ironman...
After his servitude with Freddy Maertens's Flandria team Sean Kelly switched to his second pro team Splendor. It was 1979 and with the promise from leader Michel Pollentier, he would be co-leader and the main sprinter.
Domestique hardship under Maertens served to toughen the Irishman into a sprinter. But, it proved economically one-sided for only Maertens. A change to a new team with a chance to win with a higher salary beckoned him. Even disgraced Michel Pollentier under the aura of the 1978 Tour doping scandal guided an willing Kelly to leave for brighter shores.
Splendor was a new team and there were logistic problems. Under wet conditions the bikes brakes were inoperative. Not a good start. Wheels disintegrated over the cobbled roads of the classics. The disheartened team said the bikes were unfit and with their safety at risk removed themselves from the dangerous Paris-Roubaix. Tyre punctures occur at a daily frequent rate. Alarmed team riders thought that the tyres used were inferior.
The team's bikes did improve and with the added addition of ace sprinter, Eddy Planckaert to strengthen the team was the door out for Kelly. His old mentor, Jean De Gribaldy invited the disillusioned Kelly back to his fold. In 1982, Kelly led a new team Sem-France Loire, and there ... he began a new cycling life!
Freddy Maertens Sean Kelly sprinters