Lucho's rise to the top.

El Jardinerito on top of Alpe d'Huez!
Stage 17 to Alpe d’Huez, 1984 Tour de France.
Colombia had reason to smile after seeing their Lucho Herrera climb up the famous mountaintop to win. “El Jardinerito” (the little gardener) skillfully passed the struggling Badger to win the Queen stage of the Tour. Only Laurent Fignon could keep pace trailing in 49 seconds later.
Twenty-five years ago, Lucho Herrera became the first Colombian amateur to win the most glamorous stage of the Tour. It was monumental. In the 1983 Tour, the Colombians sent a ragtag bunch of riders. A year later, the Colombians sent a better team with a special climber that paved their way to the top of the Tour and the cycling world! 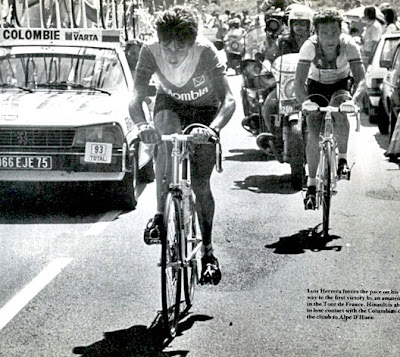