The Sting of Castelli. 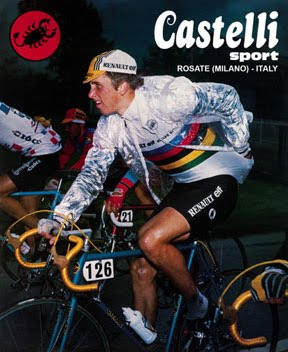 Castelli always with the champions.
Greg LeMond in 1984.
Rumors have it that the origin of the iconic scorpion logo by the Italian cycling apparel company Castelli involved a mistress born under the sign of Scorpio. We can’t be sure but it leaves a captivating mystery. 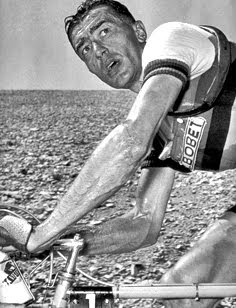 Louison Bobet on his way to winning Ventoux, 1955 Tour.
His world champion jersey was custom made by Castelli.
I felt the sting of the scorpion back in my twenties. There wasn’t much offered in Edmonton. But, I managed to find a wool jersey stamped with the scorpion. It transported me to the time of gritty rider’s of the seventies & eighties sporting majestically Castelli wear. For me the scorpion logo represented cycling.
These days it’s not so elusive to find. The famous brand is readily available. Although I have gear from other brands I do own a Castelli jacket & knee warmers. As you know I love history and proceeded to dig up some interesting facts on the famous scorpion.
The company is 133 years old and started out in 1876 by Vittore Gianni in Milan. It’s extra special when many of the cycling greats at one time were loyal clients. Alfredo Binda, five-time Giro champ, wore the gear. In 1939, Armando Castelli bought the Gianni company and kept the stars of cycling as satisfied customer’s. Notably Gino Bartali and Fausto Coppi.
Coppi employed Castelli as his personal tailor. And he soon supplied for professional teams. And it didn’t stop there. Louison Bobet, Rik Van Looy and Jacques Anquetil wore the Castelli apparel.
Armando’s son, Maurizio started his own company, in 1974, called Castelli. And the scorpion was born. In 1978, Maurizio first used lycra as the material for cycling shorts. It was a success. Eddy Merckx wore a Castelli skinsuit for his world hour record in Mexico. 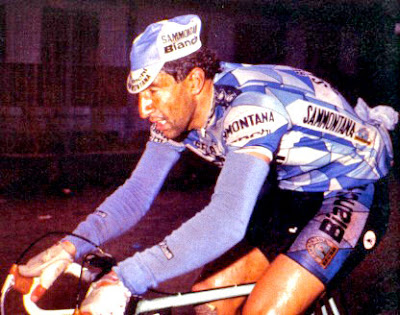 The mid 1980s with the dye sublimation process.
Paolo Rosola (Sammontana-Bianchi) sporting the new look!
The breakthrough came in the mid-1980s as Maurizio pioneered the dye sublimation process which allowed sponsor’s names and graphics to be printed on the fabric. The sponsor's names can now be promoted everywhere on the garment. Virtually most professional riders’ wore the famous scorpion at one time or another. And when you put a Castelli on you’re wearing cycling apparel steeped in tradition and innovation. 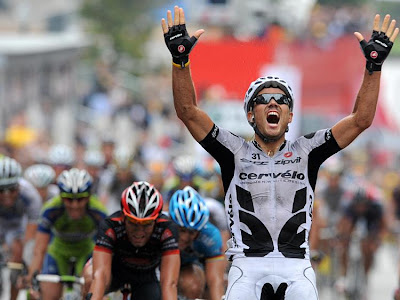