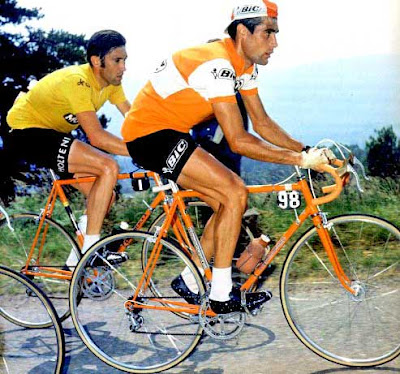 1971...
The toreador gave Merckx something to think about!
Luis Ocana was a true toreador. An aggressive hero in every sense with courage to wrestle with Eddy Merckx. Nineteen seventy-one was the ring for the toreador to enter and Merckx as his bull to wrestle with. 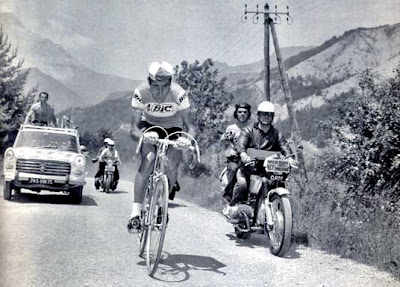 Ocana will don the yellow jersey after he wins the
stage into Orcieres-Merlette!
At the 1971 Dauphine Libere, Merckx already felt the strains from his Spanish adversary. With repeated attacks from Ocana (1970 & 1973 Dauphine winner), Merckx just managed to win his only Dauphine by only 54 seconds from Ocana. Even at Paris-Nice, Ocana hung ominously close to finish third from Merckx. No wonder with the upcoming Tour, Ocana had thoughts to challenging the Cannibal for victory.
As few riders' were only distant competition for Merckx, Ocana offered up as perhaps the closest rival to the Cannibal. Born in Spain but raised in France this toreador understood what it was to be French but with a Spanish heart.
Ocana like a true toreador commanded and dictated the race winning the Puy de Dome stage. And, on the stage to Orcieres-Merlette he stung the Cannibal by gaining nearly 9 minutes and taking the yellow jersey. The day to Luchon would be different. The fight was on as Ocana fought side by side with Merckx through the Pyrenees. The day was black as a tempest of a storm broke out. Hailstones pelted the riders' and mud flowed onto the roads. On the drop of the col de Mente, both riders fell on a bend. Merckx got up and went off.
For Ocana took a wheel from his manager and Agostinho then Zoetemelk slamed into him at high speed. He doubled over a painful expression of broken rider. He left the Tour with severe bruising. His glory to win the 1971 Tour was rudely taken away. At the end of the stage Merckx refused to don the yellow jersey out of sympathy for Ocana. Merckx even talked of abandoning the race, but he eventually decided to continue. He knew it was not the way to win.
As for Ocana, he was broken but the toreador would fight his way back to win the 1973 Tour ...without his absent rival Merckx!
The storm erupts... 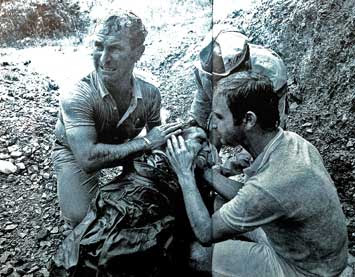 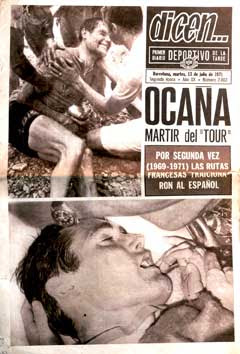