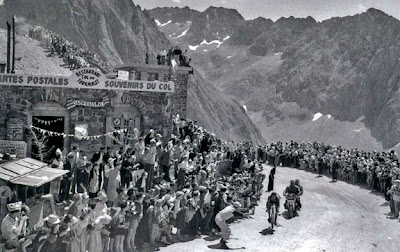 The eagle soaring on top of the Col du Tourmalet!
This 2010 Tour will re-visit Holland. A long time coming since starting in Amsterdam back in 1954. It was huge as the Tour celebrated it's 51st edition with the new twist of starting for the very first time outside France. A fine publicity feat, too. Frenchman Louison Bobet was back to defend his 1953 victory and it was simplify by the absence of the Italians. 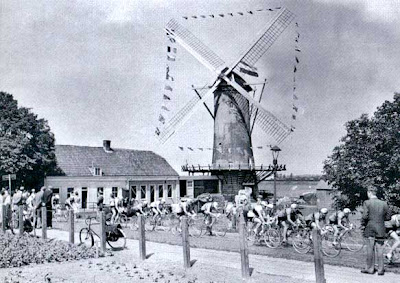 1954...
A Dutch treat!
Hard to believe the Italian squadra wasn't there. At that year's Giro the top riders' like Coppi were caution for not racing and allowing the domestiques to take most of the stage wins. After a riders' strike, the Italian Cycling Federation refused a team for the Tour. Even the French organizers refused any Italian riders' from entry into the race. With Coppi out of the Tour a star was out, literally. To add to the drama Coppi went out training, during the Tour, and was hit by a wheel that flew off a passing truck. He fractured his skull!
You can imagine the interest the Tour generated as a reported 100,000 Dutch were on hand to cheer their own Tour 'hero'. Flying Dutchman Wout Wagtmans won stage one welcoming the Grands Départs in Amsterdam.
A Spanish sensation started his first Tour. Federico Bahamontes got his eagle wings over the grand summits in worthy style. He proved to be the revelation of that Tour amassing plenty of climbing points and making Bobet wince more than once in the high mountains.
But, Bahamontes was not a well known descender and ran painfully into a cactus as an amateur. On top of the Romeyere he waited on the roadside for the rest eating an ice cream. It worked. At the very least to calm him from the inevitable descent. The Eagle from Toledo finished 25th overall and flew to his first mountains classification. 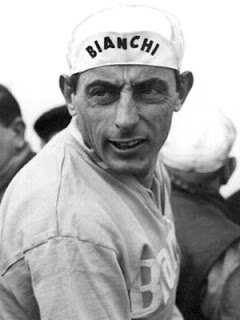