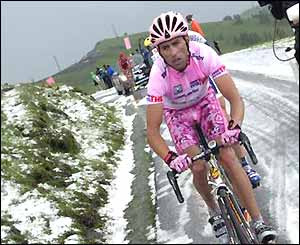 A pink Simoni when the hail fell...
Two thousand and three was the year for Gilberto Simoni to exonerate his name. You see the previous year, in 2002, he tested positive for cocaine and thrown out of the Giro d'Italia. He ate coca candies bought by his Aunt while in South America. He was later reinstated by the Italian Cycling Federation. 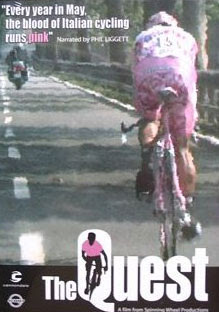 I finished watching this entertaining and exciting Giro titled, 'The Quest'. Along with Simoni's strong drive to prove himself I marveled at the efforts of Il Pirata. Still morally depressed by the drug scandals, Marco Pantani fought on and stayed in contention in the high mountains. Sadly, he eventually finished his final Giro in 14th overall.
World champ, the Lion King Cipollini, was astounding winning two stages and importantly given a special award for the most Giro stage wins (42!).
What I also enjoy was the profile of Captain Simoni and his coffee fueled Saeco soldiers. Really the stars of the show. They followed all nine team members, three directors, three mechanics, five soigneurs and the bus driver as they negotiate through the great race called the Giro.
Loved it! 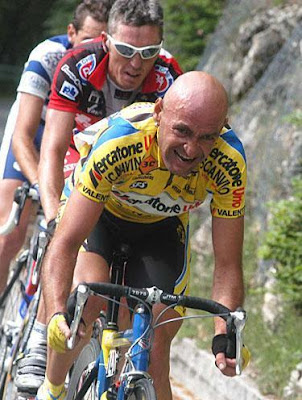 NickO said…
Please post some details about the DVD - I'd like to buy a copy, but couldn't find it on Amazon