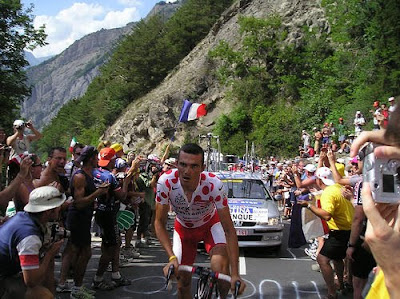 2003...
Virenque up there with his fans!
I've been thinking highly, pardon the pun, of les grimpeurs. The mountain specialists that can effortlessly fly up a mountain. It's a beauty to behold. Steady rhythm. Eyes staring. Concentrating.
Awesome to watch as these light weight riders' with their thin bodies on their light machines gliding effortlessly provokes admiration on my part. Probably because I'm not a talented climber. At times I wish I had the ability. Despite the fact, it never stops me from trying as the pavement goes upwards. I'm always awestruck like the rest of us mere mortals how good they are.
I'm watching, for the first time, the 2003 Tour de France on dvd and it's magnetic. I can't help but admire the hip coolness of Richard Virenque in the polka dots rushing upwards to Luz Ardiden. Maybe because he was a heart throb to the ladies that earned part of his cool stripes but he always had the mountains to conquer. During his chaotic career he emerged tarnished from the ugly Festina affair but he set the record of seven KOM's jersey. He won the KOM's jersey in 2003. Then the following year, not being content with tying the record of six KOM's, he'll win his seventh to break the record from Lucien Van Impe and Federico Bahamontes. I have a feeling that it will be near to impossible to topple him as the King of the Mountains record holder.
Call it the unobtainable seven!
Charly Gaul Grimpeurs Inspiration

Joylene Nowell Butler said…
A friend of mine wrote The Tour. Dave Shields. You have a lot in common.
December 6, 2009 at 7:44 AM