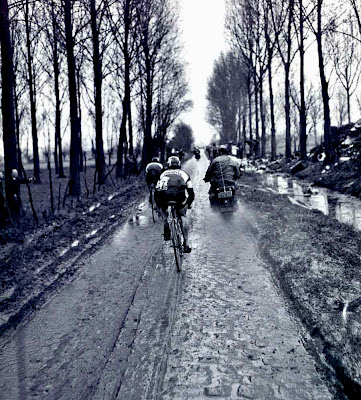 The nice & muddy 1970 P-R...
Merckx is well out in front from his frustrated rivals.
It's enough effort just to keep upright!
From: Paris-Roubaix.
Another stab into the inclement weather as I set out this morning for my P-R like ride.
The forecast said partly cloudy with a chance of Sun? Well, all I had to do was bundle up and with hot tea in a second bottle took off on my UBC ride. Why do I listen to these hack weather forecasters? Four degrees Celcius with the ominous dark clouds should have tipped me off as it started to rain. And the fair weather forecast vanished like a gambler's lucky streak. In fact, it never occurred to me as I just missed the morning hailstorm. Except on my way closer to home I did ride over the soggy frozen remnants from the storm.
I managed to stay out to complete my wet circuit, got home and turned on the hose to the bike. My leg warmers were covered in road dirt and I felt like using the hose on them. I'm glad I sidestep the nasty hailstorm.
My guess it wouldn't be quite like Paris-Roubaix! 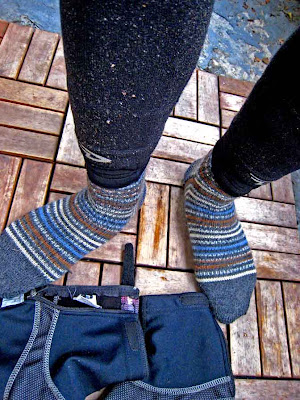