Waiting for the Broom Wagon. 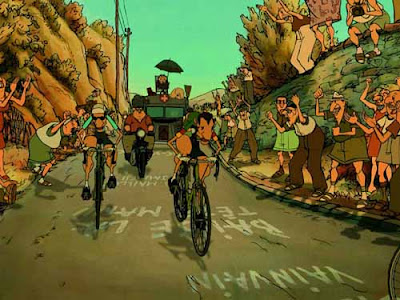 Off the back in Les Triplettes of Belleville,
the Madame Souza special!
The voiture balai – is the most iconic vehicle in the Tour. First introduced by Henri Desgrange in the 1910 Tour along with the new climbs into the high Pyrenees. Others said that it was a savvy way to prevent cheating at the back of the race.
Also called the broom wagon, its purpose to pick up riders too exhausted to continue the race. For many years a broom was mounted on the van that acts as an ominous symbol trailing the last place rider(s) waiting to ‘sweep’ them up. That was up until 1992, the organizers decided the broom was outdated.
The lesser lights climb into the van. But, you rarely would see the big stars. They will call for cars or wait at the feed stations. Of course there’s exceptions to the rule. 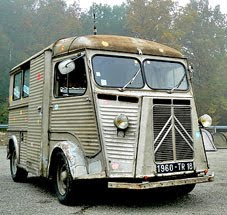 My favorite broom wagon...
The iconic Citroën H Van.
The 1965 Tour in the Pyrenees was the end for the great Eagle of Toledo. Federico Bahamontes barely survived and finished within the time limit. On the next stage, the aging star climbed off his bike and sat in the back of the broom wagon amongst startled riders.
The well known and my favorite is the Citroën H Van. It’s the most famous broom wagon of the Tour. In the late forties & early fifties it represented the Tour with it’s characteristic rippled body work and box like shape. I always like that ultilitarian look. And it had a supporting role in the excellent movie, Les Triplettes of Belleville.

It may be disheartening for a last place rider to see the balai looming over his shoulder. For the upcoming 2010 Tour a four-wheel tradition will continue rolling on … celebrating it’s 100th anniversary! 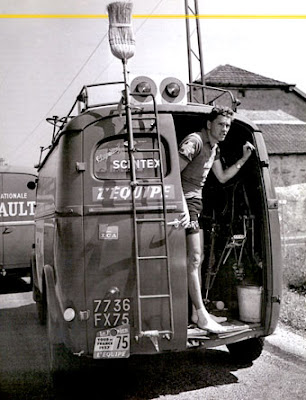 Unknown said…
I saw one of Citroën H Vans in London once and really loved it! But I was wondering what the broom was for...Thanks for the explanation.
PS. Les Triplettes of Belleville is an excellent film indeed!!
December 30, 2009 at 6:06 PM