A fear of cramp. 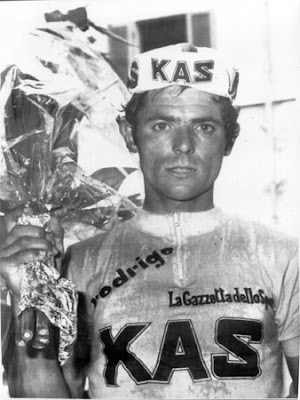 To a new drumbeat!
Watching 'The Greatest Show on Earth' I'm enjoying how this is one of the finest cycling films made. Merckx enters into sainthood by winning his fifth record tying Giro. He joins legends Alfredo Binda and Fausto Coppi.
Jose Manuel Fuente battles the Cannibal in the Dolomites and the drama begins. I'm winded watching Fuente fly up towards the Tre Cime d Lavaredo. Fuente narrates his fear of climbing in the form of cramp. He had earlier episodes that stopped him. But just watching him on this inhuman climb was extraordinary.
"Being a mountain specialist is hard and involves a lot of pain," said Fuente. Both chaotic and captivating the climb is pure hardship. "The gradient is 1 in 6 and the temperature is -2 Celcius," the narrator says.
Also disconcerting is the perfect sound of a drumbeat that acts like a sinister death march. Fuente rides beautifully never being caught by a chasing Merckx. For most of it, riding in a deafening corridor of screaming tifosi Fuente manages to outlast his foes; Baronchelli, Conti, Merckx & Gimondi for stage win.
Each time I watch it I still get a kick out of how incredible Jose Manuel Fuente could climb! 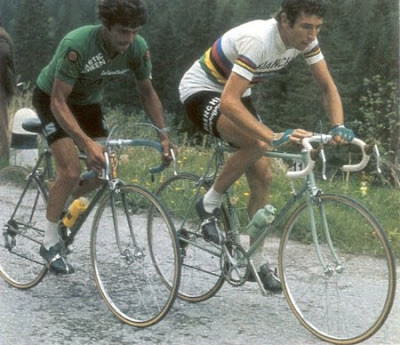