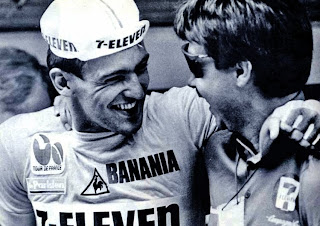 A 1986 smile...
Alex Stieda is the first Canadian to wear the yellow jersey!

After a stellar silver medal performance at the 1984 Summer Olympics & an equally amazing bronze medal feat at that year’s Worlds road race Steve Bauer vaulted into the world cycling limelight in 1985 with super squad La Vie Claire. He was affectionately known as Le Canadien around France.

Bauer had that certain je ne sais quoi. He worked hard as a domestique for Hinault and then LeMond. As his abilities grew he became team leader for Weimann-La Suisse finishing a credible fourth at the 1988 Tour. And he wore the yellow jersey an incredible 14 days completing 11 Tours & winning 1 Tour stage. La Canadien had that hard work ethic that the French naturally value and that’s why he was popular & respected.

Early in the 1986 Tour, Alex Stieda attacked on the first stage to earn enough time bonus points to become the first Canadian and North American to wear the yellow jersey. It was only for one day but the 7-Eleven American team proved beyond a doubt that they belong and with Stieda’s performance stepped rightly into history. 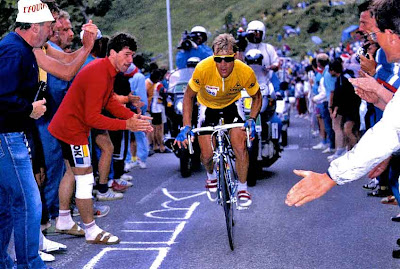 Bauer uses the Canadian hockey analogy best. “These guys are all stars for people that understand the sport and are fans of it, because they know what is going on when they are watching it. It is like the Stanley Cup. The big names come to mind, the hot ones, but the real fan understands the guys that were doing the work in the corners. They see that. They don’t just see the stars.”

A typical domestiques attitude. I admire that! 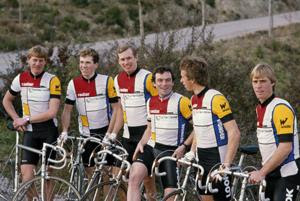