Looking through those cool shades. 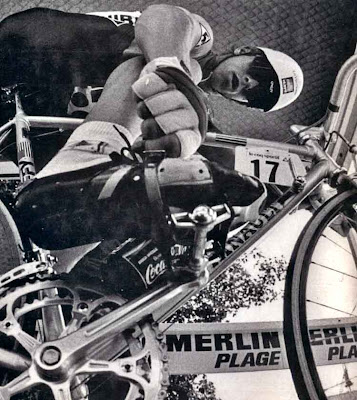 1985...
LeMond buckles up wearing his Factory Pilot's!
My first cycling sport shades were the Factory Pilots from Oakley. How I wished I still had them. They’re retro cool now, rare if you could find them. As a fashion icon from the eighties they were trendy not unlike the hair fashion of that time.

When the Factory Pilot’s came onto the market it harkened a new look in sports eyewear. That was in 1984. Give Oakley owner, Jim Jannard credit for designing a simple, protective and super light sport shades. Notably Greg LeMond, synonymous with the eighties with his three Tour wins was again the pioneer. Seems he called up Jannard to ask him if his shades came in various color lenses. That became Oakley’s stamp of approval. They were a hit. 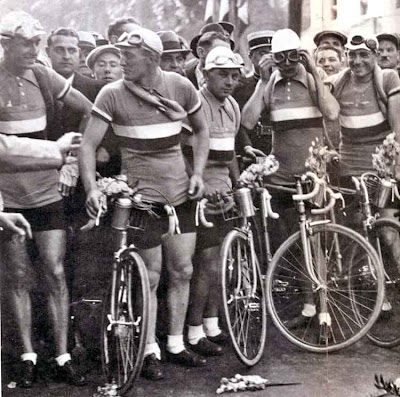 The shades came in a cool protective soft sleeve in a black matte finish. Removable lenses for the changing light conditions. Along with the dark lens I bought a yellow lens for cloudy conditions. During the halcyon days of La Vie Claire at the 1985 Tour I marveled at how cool these things looked. LeMond introduced them. Canadian teammate, Steve Bauer wore them too as Panasonic’s Aussie, Phil Anderson. A mini invasion was on.

Before the Oakley’s the riders’ wore a majority of sunshades made from …glass. A safety concern was always there. If you crashed the glass would shatter and most likely cut you. On the other hand, plastic will not shatter and will provide that most important protective barrier. 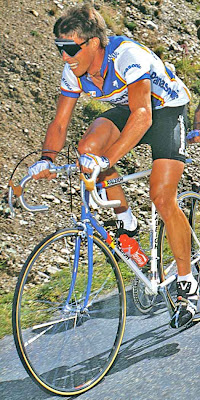 Even the Badger succumbed to the hardship of wearing his Raybans. On the run up into St. Etienne, Hinault fell and tore up his face fracturing his nose and blackened both eyes. He soon switched to the Oakley’s.

The American invasion actually started at the 1985 Giro where 7-Eleven was the first American team in a Grand Tour. The Oakley’s were introduced. They were new, cocky and brash very ultra cool. 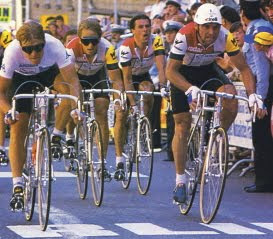 With the advent of the Oakley Factory Pilot shades came a competitor from Italy. The equally fashionable Rudy Projects soon appeared on the cyclist’s face and …the plastic fantastic was on! 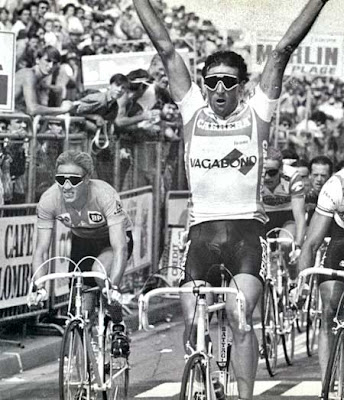 to use the Factory Pilot's.

Jim said…
Although I never liked the design, I switched to Oakleys in the 80s. In 1978 I crashed hard on a mountain descent while wearing glass lensed sunglasses. I ended up with 40 stiches in my head, most of which were the result of being cut by my glasses.
December 7, 2009 at 10:29 AM

I'm a clumsy type and I believe I either lost or destroyed my Factory Pilots. Since then I've gone through many pairs of shades. Mostly of the cheaper variety so I don't feel so bad when I destroy them totally or lose them!
December 7, 2009 at 4:29 PM