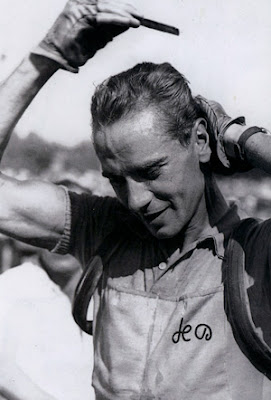 Never a hair out of place for Koblet!
We all know that cycle racing is one of the toughest sports around. A rider must have the obvious physical strength and will to succeed. I believe that these rider's charmed their way to success and became legendary...

French singer, Jacques Grello dubbed Swiss star Hugo Koblet ‘le pedaleur of charme’ for his fluid style of winning the 1951 Tour. His goggles were never out of place either on his forehead or wrapped over his left forearm. He always had a sponge to wipe off the beads of sweat from his brow. A pocket comb was always at the ready as he crossed the finish line. Better to always look good after a stage. The cycling press called him ‘as beautiful as a god’. And the women knew that too. The man personified cool. 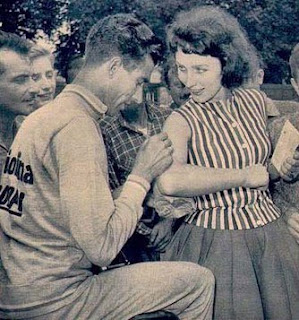 The Eagle had that certain charm.

First Spanish rider to win the Tour was Federico Bahamontes. He already staked his place as a great grimpeur, winning KOM’s in all three grand Tours. He had an explosive character once throwing his cycling shoes over a cliff and calling it quits. But better yet he flew in the mountains and the ‘Eagle of Toledo’ was pure class at the 1959 Tour.

Another charmer was Charly Gaul. The little man could climb and his domain was the mountains and surprisingly the time trials. He was a temperamental sort and known to have a sad and timid face. But, his time was in the fifties. He was flying and won the Giro (1956/59) & the Tour (1958). With his boyish good looks he made an impression on the Italian women. Legend has it that he received up to 60 love letters some days. 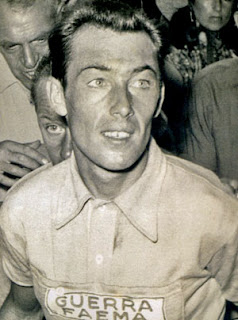 Gaul was an heartthrob to the women.

René Vietto became the darling of France for selfless sacrifice. It was 1934 and the twenty year old domestique worked for Antonin Magne. He did so in the Pyrenees as his leader Magne fell during a descent and broke his front wheel. Vietto got the word and turned back up the mountain towards his unlucky captain. A 'wheel of fortune' turned for the French team as Speicher gave his wheel to Magne. Vietto gave his front wheel to co-leader Speicher and wept by the side of the road waiting for a spare wheel. Thus the famous image. The next day was more sacrifice as Magne broke his chain. Vietto gave him his bike and help Magne win that Tour. He did what every domestique was suppose to do.

Even Magne wasn't permitted to ride the victory lap without Vietto. That day he was crowned King René and a banner had the words: 'Long live Vietto, the moral winner of the Tour.' He was legendary and at his roadside grave on a mountain pass near his hometown is a holy shrine for cycling fans.

Charm certainly has it's rewards! 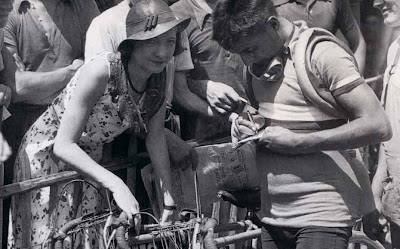 King René's self sacrifice was alluring.

Anonymous said…
Matinee idol looks! Cycling has their Kings and Jesters.
Just like in any other sport! Thanks!
December 13, 2009 at 2:14 PM