With a beer chaser... 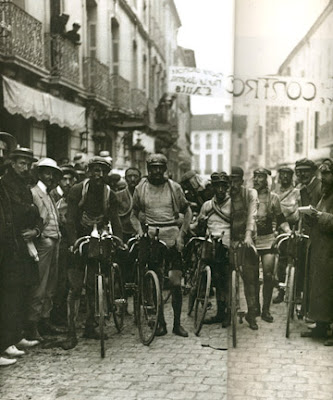 Beer is the oldest alcoholic drink around. Experts estimate the famous brew dates back 6000 BC to the Sumerians. And what’s comforting for the riders is that it and other alcoholic beverages was well 'used' in the early days of the Tour. 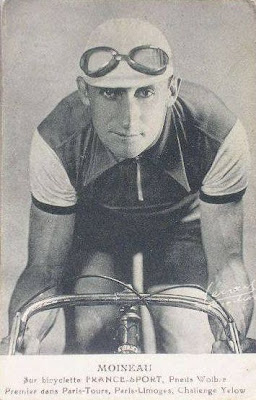 Beer was one of the accepted drink's amongst the riders. Shockingly, water was used sparingly during a race. The adage was, if you want to win a race give it to your rival. Those aluminum bottles on the handlebars were for sipping only. You can believe that dehydration was rampant in the peloton. 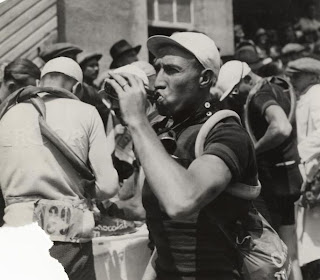 Alphonse Schepers with his 'bottle' 1933 Tour.

Champagne was often handed to the racers, from roadside fans. This early form of sport doping was widely accepted and encouraged and believed to be an effective stimulant. Medicinal wines like le vin Mariani was another accepted tonic. Wine combined with coca leaves was used for riders suffering fatigue. Unbeknownst to the rider is the dangerous addictive nature of the substance. Domestiques were also called, 'watercarriers' particularly on hot days raiding cafés to take virtually anything in liquid form: wine, beer, soda pop & mineral water back to their thirsty leaders.

During the 1935 Tour, from Pau to Bordeaux riders were welcomed by roadside table's of cold beer. The story goes, all but Frenchman Julien Moineau sped past the parched riders to win the stage by several minutes. Moineau and his pals was later found to have planned ...the beer chaser! 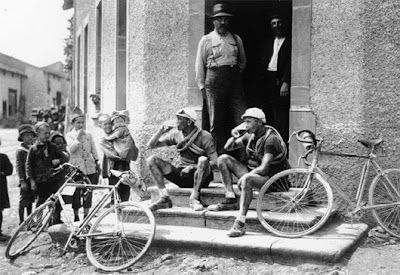 Ties said…
In the 1950 Tour de France was an algerian rider named Abdelkader Zaaf. On stage 13 from Perpignan to Nîmes he got himself into a breakaway with his teammate and fellow countryman Marcel Molinès. It way likely one of the hottest days of the Tour. "They created a large gap, also because the other cyclists were more occupied with getting drinks. Some 20 kilometers from the finish, Zaaf started to zigzag across the road. A safety official pulled him from the race, afraid for his safety, and Molines rode through alone. Zaaf did not agree with the safety official, and mounted his bicycle again. He quickly fell off his bicycle and fell asleep, and spectators moved him into the shade of a tree. When he woke up, he realized that he was in a race, got on his bicycle again and rode away, but going into the wrong direction. An ambulance was called, and Zaaf was taken away. Zaaf claimed that he had received wine from a spectator, and as a Muslim he was not used to the alcohol." (wiki)

Not surprisingly he was invented to a lot of After Tour Critériums and earned big money based on this story.