A Frenchman in Paris-Roubaix 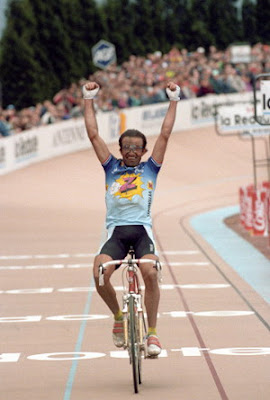 His first in 1992...
Gilbert Duclos-Lasalle spent nineteen years in the service as a professional cyclist. But, notably his favorite race was Paris-Roubaix. He was a rider made for tough one day races. He careen through his beloved cobblestones seventeen times. A reflection on his tenacity and patience. 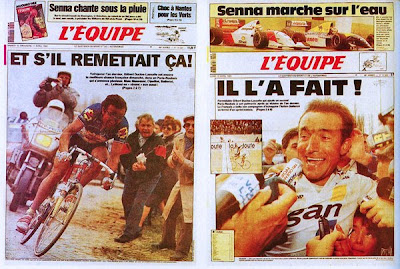 The Press played it well...
"What would happen if he did it again?"
to
"He did it!"
Two second place finishes warmed him up to his love and obsession for this classic. The 1980 race was his beginning battling Francesco Moser. The attacking Italian was too strong. And Duclos finished nearly two minutes behind but knowing he was getting close. Closer again, another second this time in 1983 behind the Dutchman, Hennie Kuiper.
His fourteenth attempt made this Frenchman more lovable. His solo attack beat back the threat by Olaf Ludwig. He made it special winning it alone. And the French fans were singing the praises of another son winning 'their' race. The 1990's seem a good start for French cycling, Marc Madiot won in 1990 and now Duclos-Lassalle returned and proved that he could race to win this great classic.
Never keep a good man down as Duclos-Lassalle came back the next year looking worthy once again. He was getting better as time made a hint to his advancing age. He was ready, and once more he found himself suited to this great race. Only one man, a young sprinter tried to impede his advance. Franco Ballerini was a consummate sprinter and together with Duclos played games entering the velodrome. Then all hell started, a track sprint was unleashed by both men as they stormed towards the finish line. It's as exciting as it gets as both men threw their bikes...
Ballerini thought he won. Oh it was so close. Duclos-Lasalle won by centimeters. He won twice that day, his second consecutive Paris-Roubaix & the oldest winner ... 38 years and 8 months! 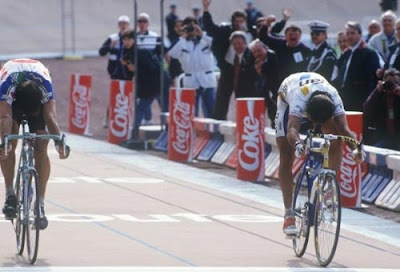 His immortal double in 1993!
favorite jersey's Paris-Roubaix The Classics The Monuments