Inside the fridge & a blended Scot. 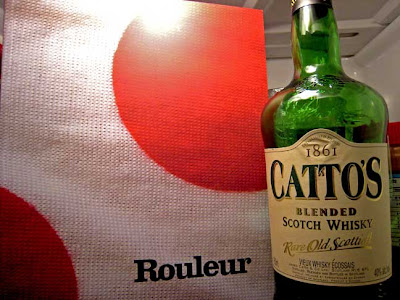 This particular Scot(ch) blends well with this Rouleur!

I don't usually have Inside the fridge posts back to back but there's always the first time...

One of the finer issues of Rouleur is Issue 13 - if the cover doesn't give you a hint what's inside then may I suggest another dram of Catto's Scotch Whisky? An excellent gift from Guy of Le Grimpeur! It's a good one, both that is, Rouleur concentrates on the enigmatic Robert Millar, the notable flying Scot at the 1984 Tour de France. And what's exciting is that he is the only English speaking rider to ever win the king of the mountains classification.

Wild rumours of Millar living as a woman prompted Journalists to go looking for him. Without much luck. The grimpeur went underground and away from the limelight. Only to re-surface at the 2002 Commonwealth Games to help the Scottish cycling team. He rode the road course with the road team and reportedly stripped off his jersey to prove his maleness. Then, we can be thankful, returning to the cycling world writing an excellent article for Rouleur.

I'm having another dram and I hope ...he's back in the cycling fold!
In the fridge... Review Robert Millar Vintage Tour de France