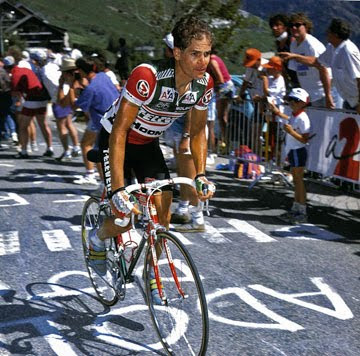 1990 L'Alpe D'Huez...
Hampsten going onto finish in seventh.
The French have an expression, promener son chien roughly translates walking your dog.
I'm reading the very interesting book, Le Tour de Foglia by journalist Pierre Foglia. An unabashed account of Tour riders during his coverage from 1992-2003. It's upfront in your face writing without the sugar coating. Certainly the world of cycle racing is far from perfect, and Foglia paints some of the riders with an unheroic brush.
The French are proud of their Tour de France, for the cyclists to suffer and give one self is tantamount to glory. It's everything French, n'est-ce pas? For this is the nation known to be in the fore front of modern ideas & modern politics. The French admire the fighter the also ran. Look at Raymond Poulidor the eternal second. Even five time winner, Jacques Anquetil took a back seat to the more likeable Poulidor.
Andy Hampsten was better known as the Velcro (able to stick onto a fast moving wheel), an opportunist, an average rouleur & a very good grimpeur. As he scaled up the L'Alpe d'Huez in 1992 he did so, promener son chien! He escaped with a small group and made it seem so easy soloing to the finish line. The hard work ethic the French believe in didn't appear to be there. People were expecting hard work. And he was nonchalant when officials wanted to help him afterwards with his bike... he said No!
In fact, Hampsten made it looked so effortless that people believed that he didn't give the rightful homage the famous stage deserves. Everyone was disappointed that L'Alpe D'Huez was won by an American who just treated the mythic mountain ...like a Sunday ride!
book Grimpeurs Mountain Fever

Jim said…
Climbing well isn't always about suffering. Some of us actually like it, and do so well at it that it becomes pleasure. I've seen George Mount actually grin as he rode away from the field on a long, steep climb. But then, I love to climb, so maybe I'm biased.
January 20, 2010 at 3:23 PM