Flecha: in the driver's seat. 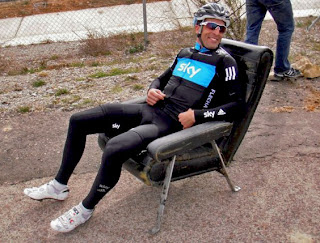 Juan Antonio Flecha or 'Flecha' as he likes to be called is already on winning ways. He helped his team win the TTT at the Tour of Qatar. A huge win for the new Team Sky. Of course, a win is good for the team, but he has other goals.
I like nicknames and he's known for two good ones; 'The Spanish Flandrian' & 'Van der Flecha'. He's come so close on winning the two fabled classics, the results are impressive.
Third at the 2008 Tour of Flanders, and his favorite race Paris-Roubaix; a second (2007), third (2005), fourth (2006) and sixth (2009). A cobbled classic specialist is what the Argentina born Spaniard, Flecha's all about. He's a rarity for sure. He says, "I'm more famous in Flanders. When I'm on the muurs training, I can hear people mutter 'Flecha' as I go past. But in Spain, I'm just another cyclist."
Now, surrounded with a supportive team, it's time for the Arrow to fly towards a certain pavé victory! 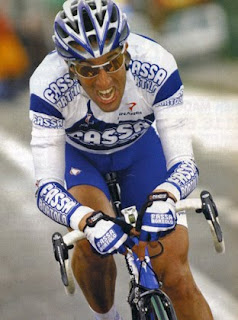 Pavé Specialist...
Knowing how to suffer
in Flanders & Roubaix.
Juan Antonio Flecha The Classics The Monuments