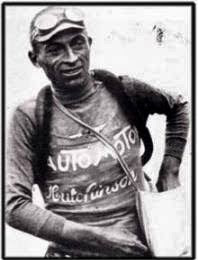 Bottecchia with musette at
the 1926 Tour.
Food & water let's say it nutrition, back in the early days of cycling took a back seat to the bike and riding. In the fifties, at the Tour, food was laid out for the cyclists before the stage start. Tour organisers arranged with hotels giving the riders a daily half a litre of wine with their breakfast and a litre with their evening meals. That's a lot of wine. So the riders would end up giving it to their respected masseurs who would be usually schloshed. I'm sure Jacques Anquetil and others took full advantage. 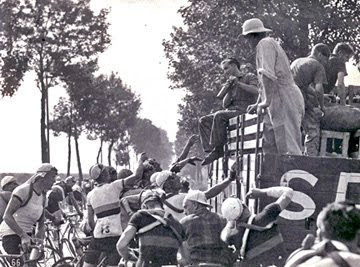 I'll have the Bordeaux!
Le Tour de Vin, 1947.
As we know, nutrition is fundamental to bicycle racing success. But, back then it was sorely missing. Musettes, the cotton cloth bags with straps, were giving to the riders during a stage. What was in it would make today's pro level cycling team's cringe. The first musette contained a quarter-chicken or similar, ten prunes & ten sugar lumps. The second musette was lighter; no chicken, double on the prunes. And wine was offered freely on the roads, either by overzealous fans and roadside trucks.
And 'drinking' on the job was considered a normal routine. Certain riders needed a 'cafe', like the Emperor ...Rik Van Looy. He won many races, ruled with an iron fist and expected the most from his charges. British rider, Vin Denson was a domestique and rode many miles for Van Looy's 'thirst'. When Van Looy shouted, "Denson cafe, cafe!" Denson rushed to the next cafe and filled his bottle. He got back to the peloton and handed it over to the Emperor. Van Looy promptly poured it on the road. Seems Denson hadn't heard that cafe can mean beer!
At one point in time tradition dictated that riders went ...cafe raiding. Not a crime. Domestiques would literally empty a designated cafe of all drink including beer. The problem wasn't the drinking but the tab the Tour organisers received from bar owners.
And that was luxurious compared to riding in the Tour of Spain. After a stage, riders would sift for their gear in the baggage wagon and ride back to the hotel with their baggage on their handlebars. There were no masseurs. I can only hazard to guess what was in their musettes!
Vintage Tour de France