The Return of Flavio Zappi. 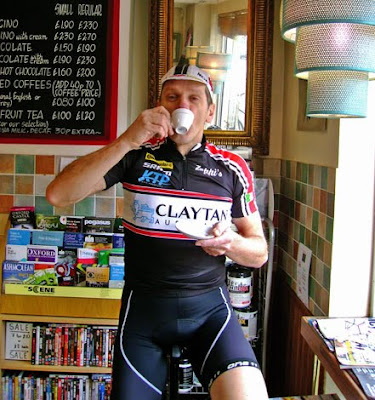 The Internet truly amazes me. It brings people who started as strangers from different parts of the World right into a close kinship. That's what happen to yours truly. Yesterday, I received an email from Italian ex-pro cyclist Flavio Zappi. Ok, you maybe asking who the heck is Flavio Zappi? Let me start from the beginning...

Together with my partner Carolle we run our business called Galstudio. We design and make our very own wonderful cycling caps and accessories. Last week we received an email from Steve who bought one of our cycling caps. He was so excited that he sent an image of himself happily sporting it. By the way, thanks Steve for the images. It just so happens that he goes for coffee at ... Zappi's Cafe in Oxford, England. Thus the tie in! 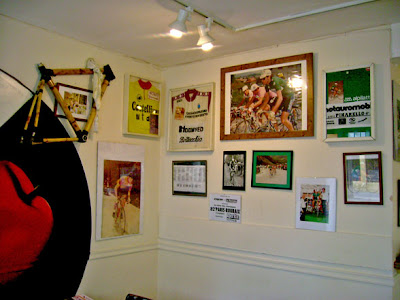 On the wall at Flavio's Cafe...
there's his green jersey!
Both images: Steve Reynolds

Steve mentioned that cafe owner, Flavio Zappi rode in the 1984 Giro wearing the green jersey. What? I did a second take. And I quickly did some research and found out it was indeed true. Obviously, I contacted Flavio to introduce myself. Shortly afterwards, I received his email only yesterday with an interesting reply.

Flavio Zappi rode as a professional in the eighties, and 1984 was by far his best year. He had good results: 12th Milan Sanremo & 18th at Paris-Roubaix. He wore the king of the mountains jersey for nine stages, riding for the Metauro mobili-Pinarello team, only to lose it to Laurent Fignon. Thus our connection. During that same year I travelled to Treviso to meet the frame builder Pinarello & bought a team jersey. I emailed Flavio that I still have it and often ride with it. He said that he was jealous because he lost all of his jersey's after all these years. So, he contacted his old director sportif in search for another one.

I discovered that Flavio returned back to cycling in 2007. After some twenty years away from it he's rediscovered the love for the bike. He now coaches the U23 Men's University Oxford team and again racing. His stories a familiar one. I returned back into cycling in 2007. Life commitments took me elsewhere but I'm glad to be back. And I can truthfully say that it's one of the best things I've ever done for myself.

And the icing on the cake, Flavio says if I'm planning to travel to England, to stop by and meet him. You know ... I'm looking forward to that! 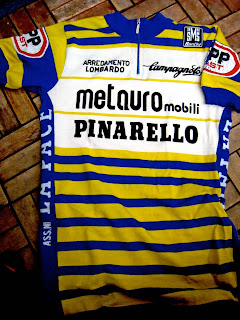