Slip sliding in the 1994 Paris-Roubaix. 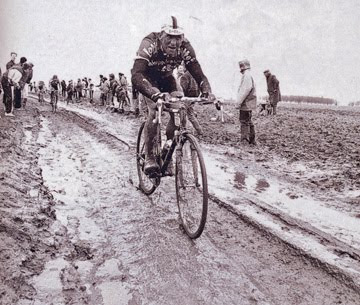 The Heroic Mudslinger: Andrei Tchmil.
I have Spring fever. I admit it. There's about a month left before the race that always leaves me with an lasting impression. That's Paris-Roubaix and how can anyone forget the 1994 muddy mess? I've watched the video (check it here!) and it's NASTY FUN; unbelievable, dramatic & anguish laden... one of the epic tests in Hell.
With about 50 clicks to go, Russian classic star Andrei Tchmil crushed the opposition to ride away for victory. That year, team's went for mountain bike suspensions and the Lotto team equipped their metal monster's with Rock Shoxs. The pavé was the most brutal with rain on and off during the day forcing mud onto the cobble roads. Tchmil rode an heroic Hell of a race, finishing ahead of Fabio Baldato (2nd) & the late great Franco Ballerini (3rd). Olaf Ludwig was fourth and fifth place Sean Yates said it best ... "It was flipping hard!"
Paris-Roubaix video