What's in the fridge: A toast to the Sweat of the Gods. 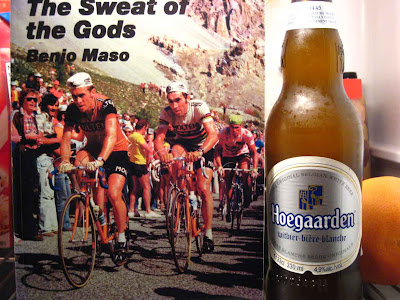 Two things are forever constant; cycling & beer. The varieties are endless (beer that is) that it's a joy to have one with a good read. I found two that works.

Belgian white beer Hoegaarden (pronounced whogarden) is a crisp 5% brew that has an distinct & quenching taste. One book worth mentioning is The Sweat of the Gods by Benjo Maso. It's an captivating read on a century of cycle racing. Maso subdivides cycling with influences between: the media (newspapers & TV), industry and the stars of all the riders. He writes with passion pinpointing and focusing the true love of cycle racing.

The book & beer are both enjoyable by the end you're asking for more. Of course, there's always more beer and Maso has another book I want called, We Were All Gods - The Tour de France of 1948...

Jason said…
If you like Hoegaarden's wheaty flavour look out for the German Erdinger Weiss beer. I'm sure you'll like it.
February 5, 2010 at 5:11 AM